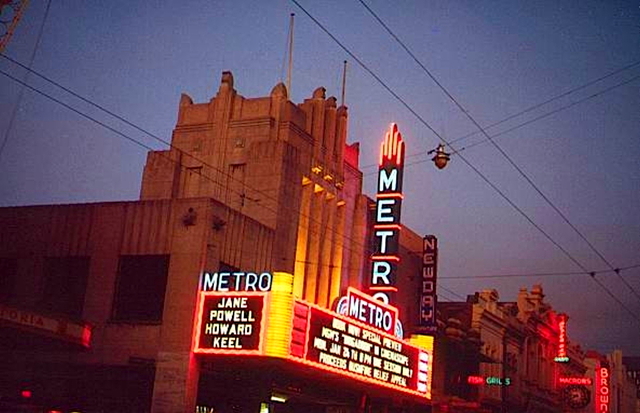 This once beautiful Art Deco style theatre opened as Metro Theatre and was built for MGM. It was only MGM Metro Theatre in Australia to be equipped with fittings sent from the USA, including heating units (which are certainly not required in the heat that Adelaide normally has!). The Metro Theatre was designed by noted American theatre architect Thomas W. Lamb, in association with local architect F. Kenneth Milne.

The Metro Theatre opened on October 6, 1939, with a seating capacity for 1,286 patrons in air-conditioned comfort in the stalls, dress circle and lounge. The seating was uniform throughout with air-cushioned seats upholstered in sea-blue moquette, which toned well with the pastel brown, beige and gold of the auditorium and the rich burgundy carpets. On each side of the proscenium four indented columns diffused the amber light which beamed up towards the ceiling. The opening attraction was MGM’s “Sweethearts” with Jeanette MacDonald and Nelson Eddy, plus a James A. Fitzpatrick Travelogue, “Glimpses of Australia”.

The decoration of the facade was reminiscent of a mini-skyscraper of the 1930’s. A large marquee with neon-strip lighting and back-lit cut-out letters adorned the main entrance.

In 1954, CinemaScope was installed and the original proscenium was widened. A new waterfall curtain in gold crushed velvet was a beautiful feature of the newly designed stage area.

For a short time it was used as a nightclub which attracted a seedy clientele. For many years it remained empty and was demolished in 2005 to make way for an apartment hotel/backpacker accommodation.

This theatre complex was still intact…and not demolished late 2004.

I think I had visited the lobby of this cinema during my trip to Adelaide in May 1998 .
Raymond Lo/5th June,2005

Very sad scenario to a once beautiful art deco movie house in Australia whose architect was Thomas Lamb!!! The beginning of the end was when “In 1954, CinemaScope was installed and the original proscenium was widened.”

I managed to purchase an original light fitting from the Metro before it was demolished,and am happy to sell it to a colector..cheers,Ken….au

The vintage picture in the header is nice.