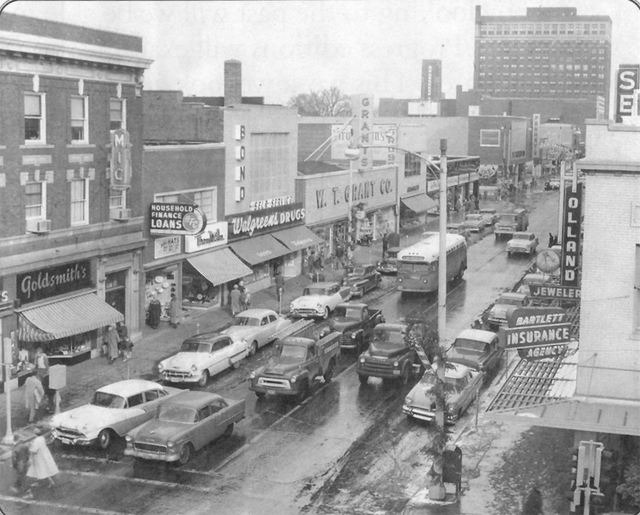 The Illini Theatre opened on November 13, 1941 with Claudette Colbert in “Skylark”. This was one of the larger houses in Moline and it was operated by Tri-States Theaters, headed by A.H. Blank and a subsidiary of Paramount Pictures Inc.

It closed on December 20, 1953 with Jeanne Crain in “Vickie” & Amanda Blake in “Miss Robin Crusoe”. The business was moved over the to closed Le Claire Theatre on December 25, 1953, which was re-named New Illini Theatre. The Illini Theatre became a Walgreens store. By 2017 it was in use as a gymnasium named Elite Athletic Club.

Could this possibly be an incorrect address? The 1600 block is all older buildings, no “empty” spot or newer building where the theater would have been. I remember going to this theater as a child and think that it was nearer to the former LeClair Hotel, which would put it in the 1800 block.

I just read the blurb about the LeClaire Theater, which might have explained my confusion that I mentioned above. There was a theater by the LeClaire Hotel, that must be what I am thinking of.(which I thought the name of was Illini). And I still don’t know where in the block the Illini Theater was!

The Illini Theatre has not been demolished. It is listed as a contributing property in Moline’s Downtown Commercial Historic District. The structure was built in 1920 as a bank and converted into a theater in 1941. After closing as a theater it was converted into a Walgreen’s drug store. In the current Google street view the building is vacant.

There might have been a theater on the site of the Illini even before the bank that was later converted into the Illini was built in 1920. This item comes from the October 26, 1912, issue of The Moving Picture World:

I don’t know if Mr. Walker’s theater got built or not, but if it was it must have been demolished eight years later to make way for the bank building that became the Illini Theatre in 1941, or perhaps part of it was incorporated into the new building. 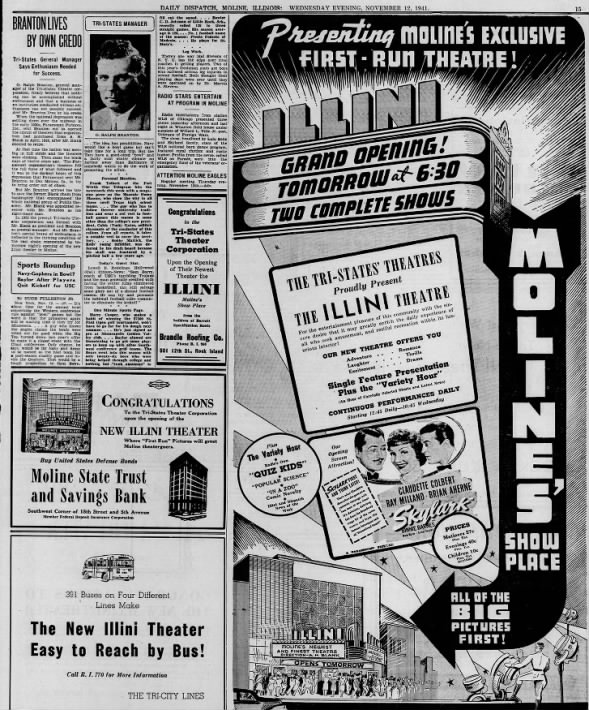 The Illini Theatre closed December 20, 1953 with “Vicki” and “Miss Robin Crusoe.” Five days later the theatre moved to the former LeClaire Theatre as the New Illini Theatre on December 25, 1953. The former Illini was retrofitted for other retail purposes.