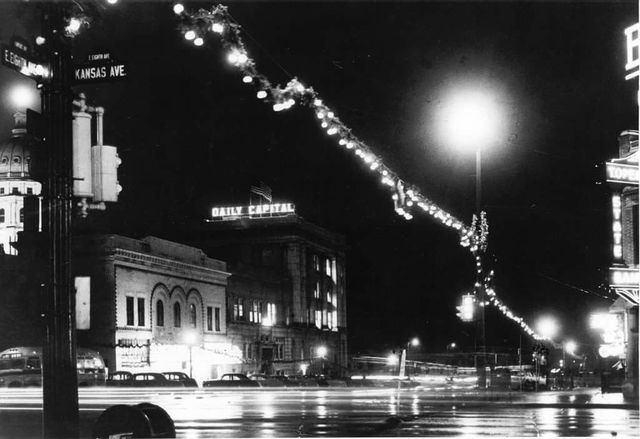 This is a very rare theatre in Topeka, KS that has pretty much been buried with the passage of time. I found a bit of information on it at the public library.

Built prior to 1915, it was located downtown at 108 W. 8th Street, two blocks west of the Dickinson Theatre, a block south of the Jayhawk Theatre, and three to four blocks south of the Grand Theatre. It originally seated 1,700, and functioned as movies and vaudeville. It was renovated in 1948.

A couple of tidbits about its history: out of the four big theatres downtown (including the Jayhawk Theatre, Grand Theatre, and Dickinson Theatre), this theatre was the last of them to get sound equipment for “talkies”, but it was the first to show 3-D movies. By the 1950’s or so, advertisements would dub this theatre as the “cool Orpheum”.

This theatre would stand for 50 years, and would be demolished in 1965 in order to make room for a high-rise bank building and parking garage, which still remain.

The October 2, 1915, issue of The Moving Picture World said that the former Orpheum Theatre in Topeka had reopened as the Electric Theatre after having been closed for two months for remodeling by its new owners, the Grubel Brothers. The new name didn’t stick for long, though, and the house was called the Orpheum again by late summer of 1916.

The item said that the Orpheum, with a seating capacity of 1,700 and a good location on West Eighth Street, “…has had an irregular career, sometimes vaudeville, sometimes pictures, for several years.” I’ve looked for earlier references to the Topeka Orpheum, but haven’t been able to find any. Still, it must have opened quite some time prior to 1915.

When I lived in Topeka in 1960, Fox Midwest was running the Orpheum and it was showing 2nd run movies, usually a double feature. The Grand, Jayhawk and Dickinson were all running 1st run features.

In the Summer of 1965, I was hired to work in the old Orpheum Theatre and worked there until it closed. I worked box office and I LOVED it. Mr Crump was my manager and transfered me to the Jayhawk where I worked Concession until a little after graduation from Topeka High. We had a old prize fighter named Charlie as our usher. Since the ticket box was separate from the building, the only time I was in the building was to watch movies. I always loved the smell of old theatres – that musty, (probably moldy) smell of the curtain and carpets where decades of popcorn and candy and spilled drinks. My favorite memory though was when Mr Crump let me go down into the basement where old props were stored from the time of the Vaudeville Circuit performers graced the stage – the time before “moving pictures and then "talkies”. Oh I wanted to stay down there and inspect each one. I never asked where they went to – probably destroyed.

The longest running movie at the Orpheum when I was there was CAT BALLOU – Oh I was SICK of it by the time it left…. https://www.youtube.com/watch?v=bX7KOebN1Fc

I just watched a 5 part documentary on YouTube, HOLLYWOOD THE GOLDEN YEARS THE RKO STORY. Now the interesting thing was that the O, of RKO, was for ORPHEUM. Back before the government broke up the movie studios and their movie theatre chains, (I think in the early 60s) the studios turned out product for their theaters. This was probably one factor in the demise of the Orpheum in Topeka in 1965. The RKO studios was on it’s last legs until being bought by Desi Arnez but the connection with the theaters was no more.

No Don H – the only manager I had was a Crump. I don’t know as I ever knew his first name. He may have been manager for the Jayhawk as well; I really don’t know. But he did bring me over to the Jayhawk where I worked in the ticket office for a short time as I always had at the Orpheum, and then move me to Concession. He was a good boss and worked hard to keep those old theaters open and making a profit as long as he could.

@Joe Vogel – I went to that website, but could not bring up the picture of the Orpheum that you use as your profile pic. Could you share it in here. I would very much like to see it.

It was in 1948 that the Supreme Court broke up the system. Forgive me for posting wrong information. Here is a good article on the truth…https://constitutioncenter.org/blog/the-day-the-supreme-court-killed-hollywoods-studio-system

Sherrie_Roberts_Patching: My profile photo is a view of Broadway in Los Angeles in the late 1920s, not the Topeka Orpheum. I don’t have a larger version of it, and can’t remember where I originally got it, though it was probably from the USC Digital Archive.

The disappearance of issues of The Reel Journal from The Internet Archive apparently has something to do with the publishers of the successor magazine, Boxoffice Pro, attempting to remove the old magazines from the public domain. Unfortunately there are a lot of such dead links in comments at Cinema Treasures, and probably most of them can’t be fixed.

I don’t remember the specific picture in The Reel Journal that I linked to, but it’s possible that it was this one which Rivest 266 uploaded to our photo page in 2012.