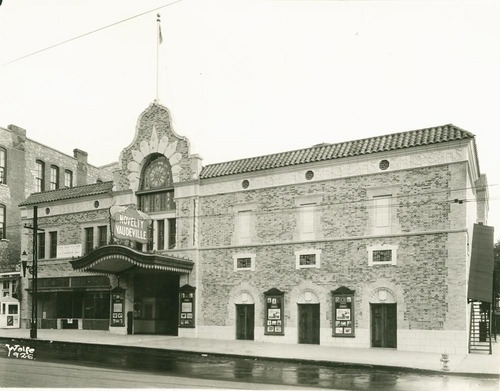 Starting out as the Novelty Theatre in 1908, the Dickinson Theatre was smaller compared to its sisters the Jayhawk Theatre and the Grand Theatre. It would start out with vaudeville performers and comedy until the 1920’s, when it became a cinema.

Not much is known or remembered about the inside of the theatre, but there was a curtain, the “Dickinson” crest hung from the proscenium, and it had a balcony.

It would remain a popular movie theatre until the 1980’s, when it would suffer from competition by newer multi-plexes being built around the city. This would turn the Dickinson Theatre into a discount, or “dollar movie” joint before its permanent closure in 1988. It would remain vacant until 1993, when it was demolished to create a parking lot.

The Dickinson Theatre was located on the corner of SE 8th Avenue and SE Quincy Street, across from the Topeka Performing Arts center (west of it). It has been said the original crest that adorned the Dickinson’s sign is stored in the Jayhawk State Theatre.

Okay I went to the Topeka Public Library today, and I got some new and more accurate info. The Dickinson, from the time of closing in 1988, seated 660. Also it had a rather large renovation in 1973, where the stage and proscenium was removed, and a larger screen was set on the wall where the stage used to be. Plus plush reclining seats were added into the balcony.
And as a final comment, the Dickinson started showing second-run dollar movies in 1987. It was also the place where the exorcist ran in Topeka, and got its premiere there. Its longest showing feature was American Graffiti.

1974,Leo Colvin was the manager and was written up for this promtion of “THE FORTUNE” Handing out Fortune cookies with prizes as high as $350.00.Not bad Leo.Boxoffice Sept.1974.

This was the main house that Dickinson operated in Topeka for many many years. Their other theater was the Fairlawn Twin and the Chief and Cloverleaf Drive Ins before acquiring the Mann properties.

An advertisement for Boller Brothers in the July 10, 1926, issue of The Reel Journal listed the Novelty Theatre in Topeka as one of the firm’s works. David and Noelle’s list of known Boller theaters has 1926 and 1944 as the years when the Bollers worked on the Novelty, and also gives the house the aka Crystal Theatre.

The Dickenson Theater was a real beauty inside and out. Yes, the stage area was altered for a larger screen and surround sound etc. I do not live in Topeka, but went there as a kid with relatives when I visited. Why in the world would the arts community of Topeka ever had let this be demolished for a stupid surface parking lot. It would have been a wonderful smaller performing arts venue or playhouse. Stupid is Supid is Stupid is is is.

This photo of the Novelty Theatre is dated September, 1926, which would be shortly after the remodeling by the Boller Brothers that year. The mid-1920s were a busy time for the Bollers in Topeka. Their new Jayhawk Theatre would open in August, 1926, and the Grand Theatre had been substantially rebuilt to their plans in 1925.

I can remember a trip to the Dickinson to see a atrocious wide screen version of “Gone With The Wind”. I lived in the 900 block of Topeka blvd, and had 4 great theaters to pick from to go to the movies back then.

Sooo glad to hear you are working on this Gypsy. Thats an awesome project, I sincerely hope it goes well. Be sure to keep us posted on your progress.

I truly loved the Dickinson as I received my very first kiss there. And anyone interested, I do have only one of the Giant Mirrors that were in the lobby. And it is for sale. If interested contact .