Operated by: Get Reel Cinemas 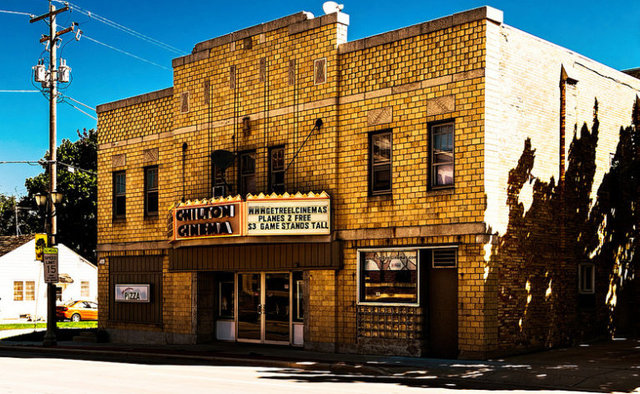 The Chilton Cinema originally seated 495 and dates from the 1920’s. It now has a reduced seating capacity and serves hot pizza and sandwiches while you view a movie. There are matinees on the weekend.

(Appleton Post-Crescent, May 9, 1931)
NEW THEATRE WILL OPEN AT CHILTON
Manager Announces Establishment Will Be Called “The Chilton"
Special to Post-Crescent
Chilton â€” John Steenport has announced that his new theatre, which is almost completed, will be called “The Chilton” and will be formally opened some time within the next two weeks.

(Appleton Post-Crescent, Friday, May 22, 1931)
The new Chilton theatre held its formal opening on Wednesday evening, an address of welcome being given by Dr. J. N. Higgins, mayor of the city. The picture shown was “A Connecticut Yankee.” Over 400 people were present.

Nice photo of the Chilton Cinema.

This theater now has digital projection according to its website.

Chilton didn’t have the best of luck with theaters prior to this theater. The Liberty Theatre (formerly the Royal Theatre) burned to the ground in 1924. The Auditorium Theatre took over as the town’s primary movie house and — just after installing sound projection — burned in a tragic fire in 1930. The Chilton was constructed in a much more fireproof manner launching May 20, 1931 and continuing into the 21st Century.