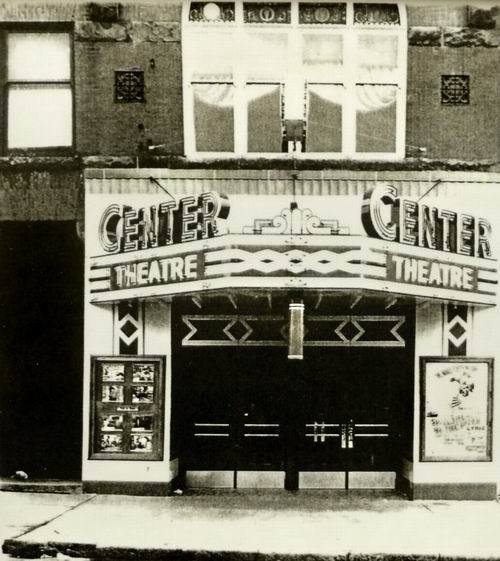 Originally opened as the Kozy Theatre in 1914, it was located on James Street. At some point of time the Kozy Theatre was moved to the W. Ludington Avenue address. It was remodelled in 1942 and was renamed Center Theatre from June 6, 1942. It was closed in March 1954.

It was back in March of 1954 when the beautiful Center Theatre in Ludington became another darkened motion picture house. It was a common trend across the entire country as the novelty of television began to take its toll.
Now â€" almost six years later â€" the lights of the Center Theatre
will glow again. However, there’ll be no Barrymores or western stars or cartoon characters on the silver screen because the Center is no
longer a theatre. “Extensive remodeling is under way at the present time to convert the former theatre into a plush canteen for young adults of high school and college age and will be known as ‘Center Town.’ Don and Shirley Wilkinson of Ludington have obtained the lease to the premises and will operate in association with Tommy Roy, top West Michigan disc-jockey and sportscaster. Mr. and Mrs. Wilkinson were formerly partners in a local restaurant business.
‘Center Town’ will cater to the teen set of nine surrounding communities and will feature a sunken dance-floor and an ultra-modern
stage. A raised terrace will feature beautiful booths, tables, a
coke bar and a sandwich counter.
All-ceramic tile smoking rooms for both boys and girls will be another innovation. Also highlighted will be rainbow-hued lighting and plush carpeting.
Record hops will be a regular popular feature at ‘Center Town.'
Roller skating is being considered for the pre-teen set. Mom and Dad will have their nights, too, with special activities designed for them.
'Center Town’ is scheduled to open about mid-December and the first major attraction will be a mammoth New Year’s Eve Party.

(THURS., JUNE 11, 1942, THE DAILY NEWS, LUDINGTON, MICHIGAN, PAGE 9)
Ludington Has Two Fine Theatres
Lyric and Center Are Remodeled
Work on Butterfield Show Houses Expected to Be Wound Up This Week

Extensive remodeling and redecorating work at Ludington’s two theatres, the Lyric and Center theatres, making them two of the most modern, most elaborate theatres to be found in communities of comparable size anywhere in Michigan, will be wound up this week.
Center theatre, formerly known as the Kozy, was finished and put in operation last weekend. The theatre was completely rebuilt and re-equipped from the basement up. Interior was finished in knotty pine and a complete new lobby, front, canopy and marquee were installed.

Lyric theatre, where remodeling work has been carried on during off-theatre hours without necessity of closing the place, is expected to be completed this coming week-end. A new stoker and a new ventilating system are being installed, plus finishing touches on a new, enlarged box office. A complete new all-metal canopy, marquee and large theatre sign, elaborately illuminated with combination neon and fluorescent lighting, have already been installed, along with a new enameled front in cream and red. A new screen and new and improved projection equipment, new auditorium lighting and complete new streamlined theatre seating are among the other changes. Both motion picture theatres are in regular operation. They are operated by Butterfield Michigan Theatres Co., of which Wilfred Green is local manager for both houses.

A house called the Kozy Theatre opened in Ludington on July 1, 1914, according to Motography, but it was located on James Street:

“July 1 the Kozy, a new motion picture theater opened in the Zeif building on James street, Ludington. Rudolph Zeber and R. R. Cunningham being the proprietors of the new show house.”

I don’t know when the Kozy moved to its Ludington Avenue location, but it was probably long before the 1942 rebuilding. In addition to the changes noted in the article LouisRugani cited above, the June 4 issue of the paper said that the rebuilt house had a greater pitch to the floor to improve sight lines, and the seating capacity had been increased. The rebuilding had taken eight weeks. The house reopened as the Center Theatre on Saturday, June 6, 1942.

This is amazing! I never knew there was a theater there. It was deans 4-in-1 when I was growing up. Do you have the original photo?