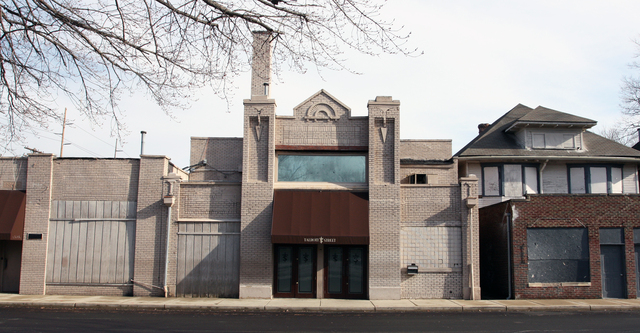 Closed as a movie theater in 1967, it became the Black Curtain Dinner Theater which lasted until the late-1970’s. It has been in use under various names as a bar and nightclub.

Where did the photo and comments go?

The Black Curtain Dinner Theatre did not close in 1970 — it was alive and well until approximately 1980, as I performed in a number of productions there from 1977 through 1979. It was a wonderful, very special place!

From, the Google Street View, the building is still there, the exterior looks nicely renovated and it is being used for something but I can’t tell what. From the decor, it may be offices.

The Talbott Street Theatre opened as a movie house in 1920. However, the building and four blocks of Talbott Street would become far better known in other ways during the decades to come. During the mid-1950â€™s the art festival that would become one of the cityâ€™s oldest, the Talbott Street Art Fair, was established. It began modestly in an alley as a way for students at the nearby John Herron School of Art to sell their creations During the 1960â€™s, the Talbott area became associated with peace activists and bohemians, as well as artists.

By then, the movie house had become the Black Curtain Dinner Theatre. Along with the adjacent Hummingbird CafÃ©, the dinner theatre was popular through much of the 1970â€™s. Today the Talbott Street building is an alternative entertainment venue that opened in the former theatre at 2145 N. Talbott Street in 2002. However, the area has been known as a welcoming one for the gay community since the early 1980â€™s. The current nightclub, which has a Studio 54 style of dance floor, replaced the other gay clubs at the same site.

This page about the Talbott Theatre from Historic Indianapolis says that i was designed by architect George V. Bedell.

Geo0926 do you have any pictures of the inside from when it was the Black Curtain Dinner Theatre?