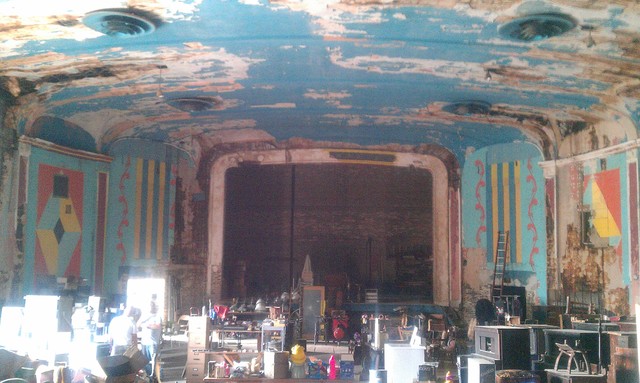 The vacant Brin Theatre was severely damaged by a fire on August 10, 2018.

The link is not working. This story from 1969 may have been premature:

MENASHA – The Brin Theater and a bowling alley in the same building have been closed down permanently and are being dismantled, according to the manager of the theater chain that owns the downtown landmark. Henry Tollette, Neenah, manager of Marcus Theater Enterprises, said the decision was made due to numerous factors including lack of convenient parking space which hurt the operation of the movie house and recent mushrooming of new bowling alley establishments which cut into the Brin Bowl operations.

He added, however, that the 40-theater Marcus chain would be interested in participating in the downtown redevelopment project by building a theater. “If there’s going to be space available for a theater,” Tollette said, “certainly we’ll build a theater there.” The present Brin Building is shown as parking area in downtown redevelopment plans, but a theater is included in a retail complex proposed to be built east on Main Street from the present theater. The theater seats, projectors and other equipment in the theater and the equipment in the bowling area are being dismantled, Tollette said. A sign on the marquee of the theater declaring it temporarily closed has been removed. The closing is permanent, Tollette said. The theater had been remodeled about a year ago with the seating capacity reduced from 1,000 to 840. Tollette said the current trend is to build “smaller, more functional” theaters with 500 to 600 seats. The Marcus chain’s new Cinema I theater in Appleton is such a house.

Some of my photos of the Brin can be seen at.

Here is an October 1963 ad from the Appleton Post-Crescent:
http://tinyurl.com/2gskzq

The current mayor of Menasha was on the BOD of the Brin Alliance group. He has alot of info. The organ still exists and is owned by someone in the midwest. I toured the Brin in early 2000. If only those walls could talk. The signs of art deco are still within. The fly loft is ready for rigging and wants to perform again…This theatre was built for vaudeville in the 20s. When the war broke out it closed. The bowling alley is still below. The cost to redo the exterior and abate lead paint in asbestos os high although the reward to reopen this grand theatre would be so worth it. anyone interesting in talking about this project contact me. I am dedicated to the survival of Menasha and the Fox River Valley.
…and Johnny LaCount…you may be my next door neighbor growing up on Naymut St.!?!

Menasha â€" Willard Allen, 20, 418 Water street, Menasha, waived preliminary examination this morning and pleaded guilty of grand larceny and breaking and entering in the daytime when he was arraigned before Judge S. J. Luchsinger in municipal court at Oshkosh.
His sentence was taken under advisement by the court until 10 o'clock Friday morning. He was committed to the county jail to await the court’s decision.
Allen confessed stealing $433.34 from the safe of the Brin theater at 5:15 Saturday afternoon after Menasha police found the stolen
money in a small rag-covered box behind his home. He was arrested
on suspicion by Police Chief Alex Slomski but refused to admit the
burglary until he was convinced police had found the money.
Allen, a former theater employe, told police he unlocked the front door of the theater with a key he had retained after he was discharged a week ago. Truman Schroeder, theater doorman said he still was in the building when Allen entered but Allen hid in the washroom until he left, police said. He then opened the safe and took the money, he told police.
A week ago Allen and a friend planned a trip to Iowa and at that
time he told his friends he would have the money for the trip by Saturday, police said they were told. All but $14 was recovered.

I am taking a course in Historic Preservation/Rehab, and have chosen to do research on the Brin theater for my term project. Anyone have anything useful ie) historic photos (especially of the interior and the original marquis), knowledge of the architects/financiers of the project, happy memories, etc? Further, does anyone have thoughts about the role the Brin might play in the future of Menasha’s downtown? Please reply.

The January 12, 1929, issue of Motion Picture News reported that the Brin Theatre in Menasha had opened recently.“An article in the December 21, 1928, issue of The Wisconsin Jewish Chronicle said that the Brin Theatre would open on Christmas Day. Leonard K. Brin had just taken over the Fischer-Paramount theater chain, which included eight existing theaters (including the Brin, which had not yet been named) and options Fischer-Paramount held on five sites for prospective theaters. Brin already owned two Milwaukee houses, the Majestic and the Garden.

The Wisconsin Historical Society says that the Brin Building was designed by H. D. Werwath. Period sources indicate that Werwath owned a design-build firm headquartered in the Shorewood Theatre building in the Milwaukee suburb of Shorewood.

This opened on December 25th, 1928. Grand opening ad in the photo section.

A fire that started late on the Friday afternoon of August 10, 2018 and continued long into the night caused massive damage to the historic Brin Theatre building, a cornerstone for 90 years. Smoke and flames shot from the roof of the Brin shortly after 5:30 p.m. Firefighters from many departments battled the blaze deep into the night while onlookers came and went, many using their phones to record the damage. No one was injured. Eight people in six apartments above the storefronts made it out safely. The American Red Cross set up a shelter at Menasha City Hall for them. Onlookers gathered on corners all around the fire. Smoke was so thick at times that it obscured the intersection and wafted down a nearby street. The retail spaces included Joshua’s Dream, a clothing shop, a computer repair store and a couple of vacant spaces. The Brin Building dates back to the late 1920s and housed numerous businesses through the years including a bowling alley. When firefighters first arrived, flames were shooting through the roof in the middle of the building. They initially entered the building to try to attack it from the inside, but layers of ceiling above the second floor caused problems. By the time crews went to another section of the building flames had already run across the roof line inside the attic. Firefighters then left the building out of fears of a roof collapse, and continued to battle the blaze from outside. Most of the fire damage was contained to the roof, while the first and second floors sustained extensive water damage, Kloehn said. The cause of the blaze was not immediately known – a sad ending for a building that was a fixture for generations. The Wisconsin Historical Society gives it this nod: “Although altered, the Brin Building retains integrity of site and form and is historically significant as Menasha’s premiere commercial block.” Among the onlookers Friday was John Barkhahn, 76, who reflected on downtown history as he watched the flames tear apart the theatre where he worked as an usher in the late 1950s. “It’s just a lot of memories that are going up in smoke,” he said about two hours after firefighters were called. Smoke still billowed from the building. By that time, the roof had largely collapsed and charred remains where it had been protruded from the top of the structure. The remaining section had been stripped of its tiles by the force of the water from the fire hoses. Barkhahn said a friend at one point lived in the apartments above. He had been at home down the street Friday when he saw smoke blow past his window, so he came down the block to check it out. Gina Montonati, 52, rushed to the scene as soon as she heard the Brin was burning. Her parents met 60 years ago in the bowling alley that was once in the Brin Building. Her mom died about five years ago; her dad is now 85. “I think he’s going to be very sad when he finds out,” she said. “It’s sad to see the old buildings go. You can’t replace those.” Lifelong Menasha resident Joel Humski, 47, described sadness at seeing the historic building go up in flames.