B & B Theatres Vicksburg Mall 6 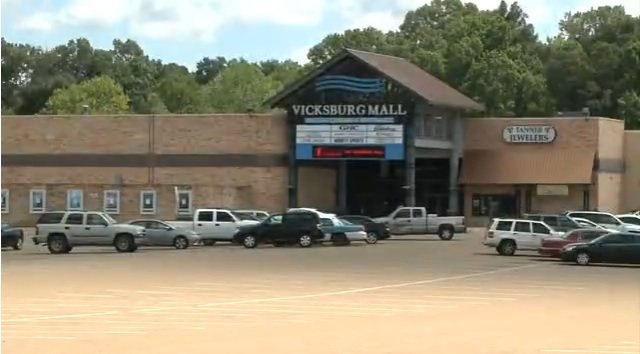 This four screen was opened in 1985 by United Artists Theatres. It was later operated by Wilcox Theatres and featured first run attractions. Seating is listed at 920. It was closed in December 2006. It was reopened in 2008 following renovations. In 2015 it was taken over by B & B Theatres.

Want to make money? Open a theater in Vicksburg. Even when the atrocity that was Pemberton Square 4 was open, you had to drive a minimum of 35 miles to Clinton to see a flick in a decent venue. And please don’t put it in the mall. That would be cruel.

The atrocity that was Pemberton Square 4. LOL. That is funny.

Like to know how Pemberton Cinema 4 closed? A varitey of factors came into play.
CBL Associates who owns Pemberton Mall got into squabble with Village Entertainment. It was was cuppled with poor management,poor property manamagment as well. Now Village bragged it was going to renovate this cinema in the summer of this year. Never happened. Anyway CBL was due on rent. Now CBL has been losing stores in the old Pemberton Mall due to its high rent. Beside the fighting among black employees,Village refused to pay high rent to CBL. Around the first week or after CBL closed the cinema. But the cinema had a number of bad issues. One of the things was poor maitence of the housing where the cineam screens are. Holes in the ceiling,broken projectors etc.
Here’s an update. One of the former locals Gertrude Young has been running her mouth on the local radio am station here that another cimema is coming. But she hasn’t named the operator. Enough to make one skepitical. CBL has been quiet on the issue too.

I can tell you there has been a lot of chatter increase chatter over a cinema. Here’s another fact: Gertrude Young has gone silent about her investors. CBL Associates has been quiet as well. And the locals have been asking questions. And so have touriists. So far I haven’t heard what the chatter is about. But I’d like to know what the hell its all about.

Apparently, Wilcox Theaters is in the process of renovating this theater and hopes to open in a few weeks.

The theatre is now open as Wilcox Theatres Pemberton Square. It has been totally redone and updated from screens, seats, sound, etc.

On Their website they list this as the Wilcox Cinema 6, did they add two screens when they renovated? At any rate the number of screens should be changed to 6.

A few days on Sept 11 Wilcox Cinema 6 closed in Vicksburg Mall. In the post the owner decline to mention why he had to close the cinema here in Vicksburg Ms. Yet the Mall Operation says another Cinema is coming but he couldn’t say when. I rated Wilcox when it was open average but it had one problem. It would hold over movies for long peirods time. Before it close The Man From UNCLE,THe Gallows were held over the past sevral months. Antman,Fantastic 4,Mission Impossible Rogue Syndica didn’t open. The Cinemas Facebook page hasn’t been updated on its closing. But a few comments on locals are there. So for the River City is without a cinema again.

Well B&BB is one of the oldest Theatre Companies in the US so I think they should be able to make a go of this theatre.

According to information I found the theatre originally opened in 1985 and was closed in December 2006. In 2008 it was reopened, still with four auditoriums, but renovated by Wilcox.