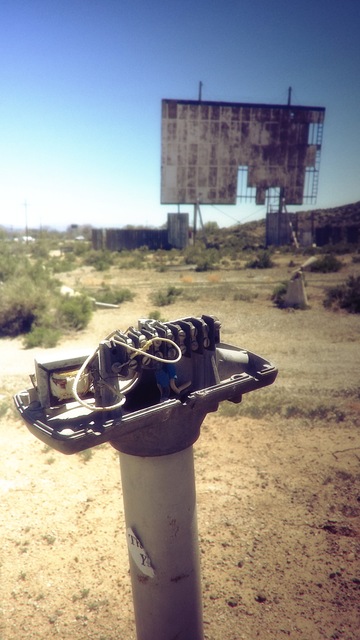 There are some photos of the Sage on roadsidepeek.com:
http://tinyurl.com/39cjjo

Here is another photo:
http://tinyurl.com/ch38zs

Approx. location for this drive-in was north of U.S. 95 Alt & Birch Dr. Ramps, screen and building still up for now.

I found some more info: the first film was “The Living Desert” from Disney, which puts the opening around 1954. It closed sometime in the 1980’s.

No, I grew up in Yerington, and it was open well into the 90s. When Casino West (now Pioneer Crossing) opened their indoor theater in the summer of 1992, this drive-in was able to compete with it for a few years because they each only had one screen. I believe it closed around 1995.

Boxoffice, June 20, 1953: “The Yerington Drive-In at Nevada opened May 27. The 350-car ozoner is owned by Regina and Pete Perry who now are staging a contest to determine a name for the situation.”

The Sagecrest Drive-In Theatre closed in 1984. It then reopened under new management after a five year absence on July 7, 1989 with “Batman.” It closed again and reopened with new management on May 17, 1991. The Sage Crest Drive-In Theatre closed August 16, 1995 with “Pinocchio” and “Newsies.” It had English language feature films on Friday and Saturday and Spanish language offerings on Sundays. It closed again and reopened on July 7, 1995 with “Congo” and “While You Were Sleeping.” It appears to have closed at the end of the 1995 season for good. However, it was listed in the newspaper listings without showtimes from 1996 to 1998.

Article with a drone pic of the Sage Crest.

Looks like with some work, this could be reopened.