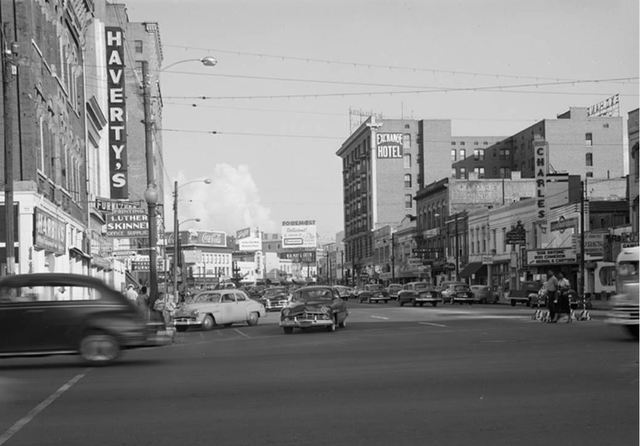 Originally opened as the Capitol Theatre on September 3, 1926. It was closed in 1928. It reopened as the Tivoli Theatre on December 16, 1928 with Clara Bow in “Parisian Love”. It continued with this name, operated by Paramount Pictures Inc. through their subsidiary Wilby-Kincey until early-1947. On January 12, 1947, it was renamed Rogers Theatre, and continued until it closed in 1956. It was located next door to the Charles Theatre.

I heard this comment about this theatre in it’s last days: You need to take two sticks with you when you go there. One to hold up the seat and one to fight off the rats. I personally have seen a rat go across the floor the only time I ever went there.

Thanks William and welcome to Cinema Treasures!

This picture is the l wrong location .Rember seeing it when ti was an insurance building, I could not believe it could be a theater cause it was small. The back had the left over exit door. My dad ran a business at Frank Leu building in the early 71.My dad claim that the owner tried to sell it to him. He told me that the screen was big as 4-bed sheets I would explore the ex-theater building .My dad told me that the bathroom was downstairs.Years later the building was a Chinese all you can eat restaurant.I went in there and the bathroom downstairs was sitll existing and being used .I don’t know what it looked like as a theater. No pics, but, it could have had stadium seating, dug from the ground to make it bigger.An ex-friend told me when he went as a kid he would take a stick to fight off the rats,