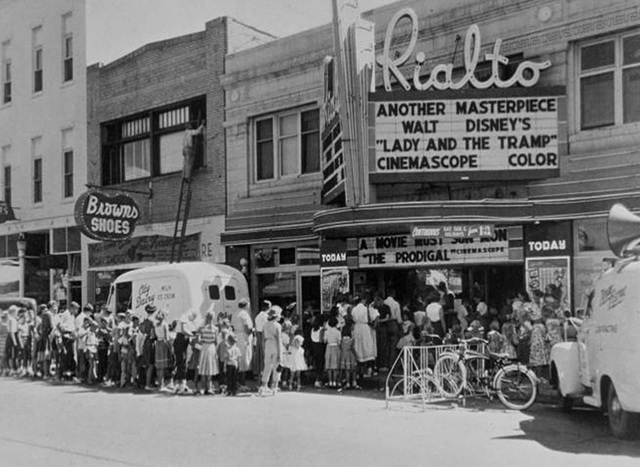 Opened in 1920, the Rialto Theater was designed by noted local architect Robert K. Fuller in the heart of downtown Loveland. When it opened, the Loveland Daily Herald declared the Rialto Theater the finest theater north of Denver. It seated over 1,000, and contained a balcony, orchestra pit and dressing rooms.

Designed primarily for silent movies, the Rialto Theater also hosted vaudeville shows in its early years, as well as local talent shows and graduation ceremonies. In 1935, the theater was purchased by the Gibraltar Enterprises Inc., who modernized the Rialto Theater, though much of its original decor was untouched.

Gibraltar Enterprises Inc. owned the theater until 1947, and from then until 1977 was run by a series of owners. It remained a popular venue for the majority of those years.

In 1977, the Rialto Theater finally went dark and was converted into a mini-mall and office space. Most of its original decoration was lost at this time. By 1987, the mall was vacant.

That same year, the Loveland Downtown Development Authority recognized the Rialto Theater as a possible anchor for the rebirth of the historical downtown area. Plans were drawn up to return the Rialto Theater to it’s 1920 splendor for use as a performing arts center. It wasn’t until early-1996, however, that the Rialto Theater, fully returned to its original appearance, and was reopened.

The theater was turned over to the City of Loveland two years later. Today, the Rialto Theater hosts everything from silent film screenings to children’s theater to rock concerts.

Myself and my family have volunteered at the Rialto for many years. I basically grew up around this theater! I still volunteer downstairs during live events and digital movies and am a projectionist for them during films.
It has been beautifully restored and so has the beautiful terra cotta interior. It just had new, historic looking seats installed throughout last year as well has having the wood flooring refinished. The theater continues to grow in popularity and improve vastly each year. It features everything from concerts, plays, conventions/meetings and arthouse and classic films. Sadly, many of the films these days are shown via a Christie DLP projector (DVD or VHS) downstairs at the soundrack but it does still run film and has a very nice booth. The booth contains two Kodak Ektagraphic 16mm projectors with changeover box and 2 Simplex E-7 projectors that date from 1938. The projectors were originally installed in the Broadmoor Hotel in Colorado Springs, Colorado and were donated to the Rialto in 1998. They were converted to Xenon lamps and reverse-scan LED readers in 2003 but are still quite original and still have the 2 thousand foot reel magazines that were necessary during the flammable nitrate film days.
A very classy historic theater in trendy downtown Loveland

A proposed construction project in Loveland would include enhancements to the Rialto: View link

The expanded Rialto Theatre Center was opened in April, 2012. This article from the Reporter-Herald, published shortly before the opening, features an interactive graphic with plans of the first two floors of the new building adjacent to the historic theater.