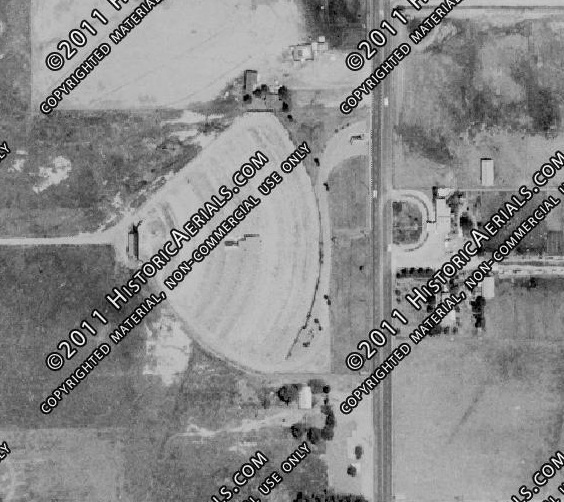 The Hemacinto Drive-In was opened in 1950. It was located between Hemet and San Jacinto, hence the name.

The 1963 IMPA shows the Hemacinto as operated by H.R. Martin, which fits with this excerpt of a Press Enterprise article in October 2000:

Inside the doors of the Hemet Theatre, posters for “The Wizard of Oz,” “Casablanca,” “The Maltese Falcon” and the Marx Brothers still decorate the lobby. The concession stand is empty, but looks like it would be ready to go once it was stocked with some Junior Mints and Raisinettes. But it has been five years since downtown Hemet’s last picture show.

The last patrons at the cavernous Florida Avenue theater filed out on Oct. 26, 1995, after a double-feature showing of “A Walk in the Clouds” and “Magic in the Water.” The theater was squeezed out of the movie business after two multiplexes opened in the San Jacinto Valley during 1994 and 1995. Julie Burgard operated the theater for her father, Harold Martin, from 1987 until it closed. He died in 1998 at age 84.

Burgard started helping her father when she was about 10, picking up popcorn and trash at his Hemacinto Drive-In on San Jacinto Avenue. She worked there and at the Hemet Theatre until she went off to college in 1975. After she returned to the valley, the theater became her full-time job in 1987. “In a lot of ways I miss it; in a lot of ways it consumed an awful lot of time,” she said.

Address above is incorrect. Approx. address for this drive-in was 1850 South San Jacinto Avenue, San Jacinto, CA 92583. Though barely visible, the outline is still there.

Plans were announced in the July 8, 1950 issue of BoxOffice: “The new 350-car drive-in the be constructed between Hemet and San Jacinto will be called the Hemacinto, according to J. W. Davis, who is constructing and will operate the ozoner. His booking and buying chores will be handled by Ish White.”

Google Maps doesn’t like CT’s current address for the Hemacinto site, which still has the faint outline of ramps visible from the air. 1940 S San Jacinto Ave puts the arrow in the middle of the viewing field. Or you can point at the Sonic immediately north of it (1810) or the Wendy’s directly across the street (1841).

Boxoffice, Aug. 20, 1955: “The Hemacinto Drive-In … has been purchased by Grace Martin and her son Harold R. Martin from the No-Ro Amusement Co. The Martins also own the Hemet, Perris and San Jacinto theatres, all indoor houses.”