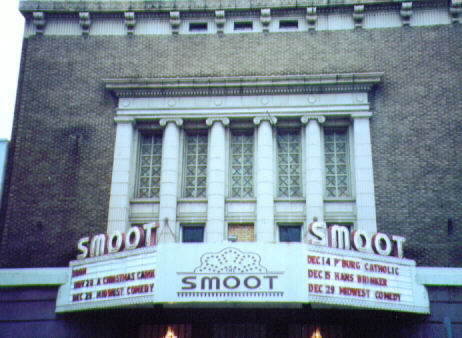 The Smoot Theatre was built in 1926 in downtown Parkersburg, the finest of seven theatres in that city.

It originally was a vaudeville house, but when it was acquired by Warner Brothers in 1930, it switched to primarily showing movies. It also received an elaborate remodeling from Warner, in an ornate Art Deco style, with hand-cut Austrian chandeliers in the lobby, beveled mirrors lining the lobby walls, and mahogany and brass doors.

The auditorium featured curved stairs on either side of the stage and lighting fixtures which echoed those in the lobby. The color scheme, in whites, creams and gold gilding, was followed throughout the public spaces of the Smoot Theatre.

From its earliest days, the Smoot Theatre was very popular, and in addition to movies, such celebrities as the Guy Lombardo Orchestra, Arthur Lake (Dagwood in the “Blondie” films) and even a Miss West Virginia have appeared on the stage. After decades of entertaining the citizens of Parkersburg, the Smoot Theatre finally was shuttered in 1986.

Miraculously, just a few days before the Smoot Theatre was scheduled to be razed, it was saved by a volunteer group determined to bring the old theatre back to life. Though not in the best of shape, most of its original Warner-era decor was still intact and was restored through old photographs, drawings and the memories of townspeople.

Meticulous detail was put into the renovation of the Smoot Theatre when work began in 1989, including returning the original paint scheme, recreating carpets to resemble ones from the 1930’s, cleaning the chandeliers, and relighting the marquee.

Since its grand reopening, the Smoot Theatre has been host to everything from rock concerts to comedy shows to ballet. Its imposing Neo-Classical facade, and brightly lit marquee are once again, as in decades past, a centerpiece of downtown Parkersburg.

The Smoot was part of the JUR Theater Circuit in the early sixties. Joseph Raad was president, while Joseph S. Joseph was general manager. Besides the Smoot, JUR operated the Burwell, Parker, Mur Drive-In and Stanley Drive-In in Parkersburg, the Jur Theater in Ravenswood, the Ripley in Alpine and the Dixie Drive-In in Sandyville. Ohio theaters in the chain were the Belpre Open Air in Belpre, the Riverside Drive-In in Constitution and the Starlite Drive-In in Marietta.

The projection room at the Smoot remains intact—although the staff don’t routinely allow visitors up there. The balcony also retains original wooden seating. Perhaps the Smoot will one day screen films again. The side of the Smoot also features restored advertising for Vitagraph and Movietone.

This 1914 photo from Google books shows the predecessor to the Smoot. The Hippodrome showed films and also vaudeville, according to the caption.
http://tinyurl.com/6nxa8u

The 1950’s renovation of the Smoot employed a vitrolite exterior with six display cases. The two end display cases were for 40X60 posters (very expensive for the time), beside each of these display cases were identical ones, each with a 22X28 half sheet on top with four 8X10 photos underneath. On each side of the ticket booth there wer two long display cases used to display a set of 11X14 lobby cards.
The lobby of the Smoot was not impressive.

The January 7, 1926, issue of The Film Daily said that architect Fred Elliott was drawing plans for a new theater at Parkersburg, West Virginia, for the Smoot Amusement Company. The house would be built on the site of the Hippodrome Theatre.

Pic of the marquee of the Smoot in early 1930: View link