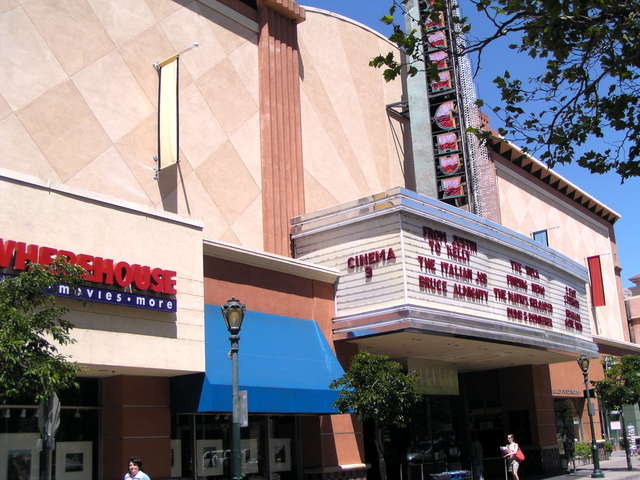 Regal Santa Cruz 9 was previously operated by Signature Theatres, opening May 19, 1995. Regal Cinemas began operating this theater in September of 2004.

The vertical sign tower of this theatre, while a completely original and unusual piece of metal scultpture and neon, nods its head slightly to the 1930s tower which was once on the “old” Santa Cruz Theatre down the street (1920, remodeled 1939, changed to office and retail by the 1970s). The crescent moon on one side of the Santa Cruz 9’s sign tower and the star on the other side, as well as the stepped structure crowning the tower pay tribute to motifs on the old tower applied during the 1939 remodeling of the earlier theatre.

The Santa Cruz 9 was designed by the San Francisco architectural firm Uesugi & Associates, which did quite a bit of work for the Signature Theatres chain before it was taken over by Regal.

Good news the new manager ‘Kyle’ will again start putting up on the giant neon marquee what is playing in side the Regal 9. The retro nice plastic letters have been missing the last month. A new letter changing pole is on It’s way to the cinema. No more lift each week to change all the letters on the marquee. This will take a little longer but may be safer to use. The movie times for this cinema will soon also be in the Good Times free magazine each week again. Now when you go by the giant lighted sign you can see what is playing and buy a ticket.