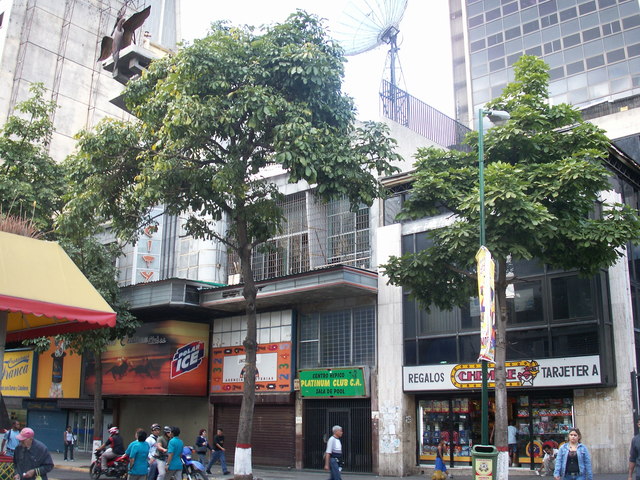 The Cine Radio City is located in the east of Caracas city centre on the Avenida Abraham Lincoln which forms part of the Calle Real de Sabana Grande.

It opened on 15th April 1953 with Maria Felix in “Mesalina”. Designed in an Art Deco style, a feature of the facade is a wide tower-like feature that is topped by an architectual statue which seems to resemble a large bird with wings outstretched, about to take flight off the platform upon which it is perched. The name ‘Radio City’ is mounted vertically on the face of the tower.

Inside the auditorium seating was provided in stalls and balcony levels. The main feature of the decorative treatment is that the auditorium interior is a replica (scaled down of course) of the famous Radio City Music Hall in New York City. From an interior photograph I have seen there are at least five ‘sunburst rays’ extending over the entire auditorium in exactly the same style as it’s NY counterpart.

Unfortunately I don’t have details of the architect of this ‘gem’ of a cinema building which (if there is such a thing in Venezuela) should be listed as a historic building. It is currently closed (April 2006) and I would estimate this has been a fairly recent closure.