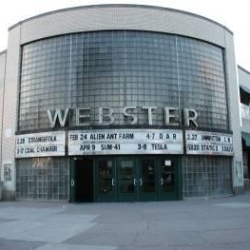 The Webster Theatre is one of Hartford’s former classic movie theatres. The architect George Zunner, with interior decorations by Pauline W. Shulman. Opened on November 19, 1937 with Gigli in “Forever Yours”. Sall seating was on a single floor. It was closed for many years after reincarnations as an adult cinema and then as a family movie house. It was restored and reopened in 1996 as a nightclub where many of today’s hottest rock acts perform.

Possibly? Creek had other Hartford and West and East Hartford venues as well. Maybe they were tapping into a market venue they knew would pay off later on in the years, which it did.

Does anyone know the current status/photos of this theatre and surrounding area as I’ll be in the Hartford area next weekend? Thanks.

The theater looks the same as it always has, at least recently. The neighborhood is dilapidated but it’s safe to walk through at night and in the daytime, unless you subscribe to fear tactics by police and the depressing news channels.

I fondly remember seeing Star Trek IV : The Voyage Home here in 1986. The neighborhood is just like any urban neighborhood, it is totaly normal.

Um. Let’s not forget that Max Creek played there on 2/10/90. My friend is a taper and he just posted a “lost” show on archive.org. Just do a quick search for the band and the dates pop up.

A number of sources attribute the design of the Webster Theatre to Hartford architect George Zunner, and others attribute it to both Zunner and Mrs. Shulman. This 1953 Hartford Times article indicates that Pauline Shulman was an interior designer. Her 1960 obituary, to which that page links, says that she was a “…designer and interior decorator of theaters and private homes….” but also refers to her as an “architectural designer”— a term usually applied to people who have designed buildings (usually houses) but who are not licensed architects.

Among the few times Pauline Shulman is mentioned in Boxoffice magazine, she usually appears as Mrs. Joe Shulman. Of note is the October 23, 1937, item which reads, not without a touch of condescension: “Taking it from those who ought to know, Mrs. Joe Shulman is doing an original and attractive job of the decorating at the new Webster, Hartford, and her verbal juggling of beams, joists, etc., is amazing the gentlemen.”

It’s quite possible that Pauline Shulman had considerable input into the style of the theater both inside and out. George Zunner was quite elederly when this very modern theater was built— he had been born in 1863. Mrs. Shulman was considerably younger, and a friend of Le Corbusier to boot. Still, Zunner went on to design at least one more theatre, the Dover, at Dover Plains, New York, in 1948.

Two photos of the Webster illustrate this article about glass blocks in the April 30, 1938, issue of Boxoffice. The article, by Pittsburgh Plate Glass Co. executive Guy Berghoff, only contains a couple of paragraphs about the Webster, near the end, but does mention George Zunner as the architect.

Glass blocks have been around a long time Joe,they do look good though!

Here is a fresh link to the 1938 Boxoffice article about glass blocks, which features two photos of the Webster Theatre.

Also in the photo section.