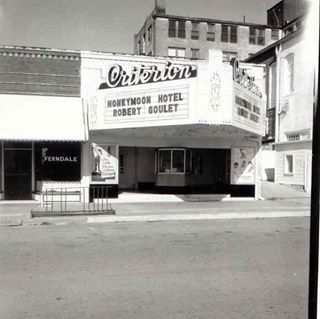 The Victorian Theatre was opened on March 1, 1924 with Baby Peggy in “Such is Life”. It was equipped with a Wurlitzer theatre pipe organ. It was closed in June 1930. New operators took over later in 1930 and it re-opened as the Criterion Theatre which was equipped for ‘talkies’. In 1947 it was given a Streamline Moderne makeover. It was renovated in an Art Deco style in 1935. It was closed on April 6, 1976 with David Niven in “Old Dracula”. The auditorium was demolished in 1978 and the lobby section became a restaurant.

In 2020 Water Street Tattoo operates from this address.

Here is a lawsuit from the 1930s involving a theater in Sapulpa. It could be the Criterion. I don’t know how many theaters were in business in Sapulpa around that time:
http://tinyurl.com/3x89h3

Basically the Criterion Theatre Building was quite modest in design, and no amount of dressy maruquees and signs could disguise this stark fact. See for yourself, type in word “criterion”, then search …
View link

An article about A.A. Moulder in the February 20, 1954, issue of Boxoffice said that he had opened the Criterion in 1931. The Boxoffice article was based on one published in the Sapulpa Sunday Herald, for which the author had interviewed Moulder.

The article also said that Moulder’s first theater had been the Lyric, which he bought in 1911. While still operating that house he and his father opened the Empress, across Main Street from the Lyric. They operated both houses for a while, but later sold the Lyric. The Moulders closed the Empress when the Criterion opened.

Both the Empress and the Criterion had sometimes presented vaudeville as well as movies, including some Orpheum circuit acts. A CinemaScope screen was installed at the Criterion in 1954.

Both modern and vintage photo of the drab Criterion Theatre can be found on Roadside Oklahoma.
http://www.roadsideoklahoma.com/node/626

James “Jimmy” Zartaludes was one of two early theater magnates of Sapulpa. He built the Victorian Theatre in downtown Sapulpa on March 1, 1924 and operated the Yale Theatre. The opening night of the Victorian wowed patrons as the Louis Silvers Band was brought in from New York City to furnish the music. Strongheart, the dog, starred in “The Love Master.” Madeline Kotz played the mighty Wurlitzer that night as Baby Peggy’s feature, “Such is Life” played as the main feature.

The Depression forced Zartaludes to part with the Victorian closing it in June of 1930 though he retained the Yale. Alexander A. “Speedy” Moulder – who had been in the industry since the first Nickelodeons appeared – would take on the Victorian transitioning it to sound and renaming it as the Criterion theatre in 1930. 1935 did bring a new deco look to the former Victorian turned Criterion. The theatre was doing well and Griffith Amusement began to take steps to block Moulder from major films and undercut his pricing policy.With Griffith Amusement at the Yale, Moulder brought a lawsuit which arose during the era in which block booking was under close scrutiny. The Criterion would get a shocking makeover in 1947 becoming a streamlined moderne theater – a look it carried to the end of its run. The theatre was also equipped for widescreen to play CinemaScope films in 1954.

Zartaludes came back to the Criterion and would be with it to the bitter end which came on April 6, 1976 with David Niven starring in “Old Dracula.” The Criterion sat empty for two years and was effectively demolished with the entire auditorium razed in June of 1978 with its tin ceiling saved and the Criterion neon signage moved. The lobby survived and became home to a number of restaurants including the Criterion Cafe using the theater’s signage followed by a Chinese restaurant and Katie’s Kupboard restaurant.

According To Sapulpa’s Daily Herald, The Criterion Is Remodeled Once Again In March 1955, Possibly Due To CinemaScope Installation, Later Reopening It On The 27th.

Celebrated a transformation by Griffith Amusements to widescreen and presentation of CinemaScope films on October 28, 1954