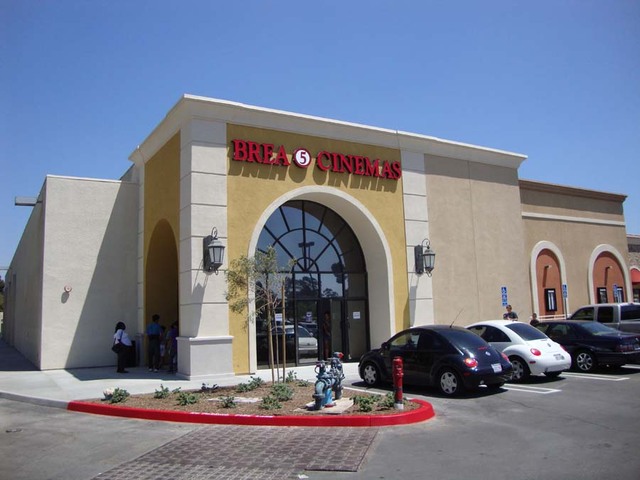 The Brea Plaza 5 was operated as a first run Mann Theatre until the mid-1990’s, when it was taken over by Edwards and booked as an art house. Following Edwards' bankruptcy, and subsequent purchase by Regal Entertainment, the Brea 5 was briefly closed, before being picked up by Captain Blood’s Family Theatres in 2002. Blood’s ran the theatre as a discount house for several years, until it was forced to close, yet again, in the spring of 2006.

Located directly across from the 57 freeway’s Imperial Highway off-ramp, the property is a relatively busy shopping plaza, next door to the Brea Mall. However, the theatre is tucked away in a back corner of the plaza, almost hidden behind the other structures. Were it not for a five foot, ground level marquee, located beside a Denny’s restaurant, there would be little evidence a theatre existed on the property.

The theatre is a non-descript, free standing, beige box and only identifiable via faded Mann era signage. Inside, the décor and layout are typical of an early/mid-1980’s multiplex; shoebox auditoriums off of a small, generic lobby, with vaulted ceiling. The theatre was obviously built on a modest budget and little effort was ever placed on maintaining/upgrading the building, resulting in a sub par venue that is in a general state of disrepair.

Underbuilt, poorly maintained, located in the worst possible area of a prime property, in close proximity to numerous competitors, and changing ownership annually; hardly the ingredients for a successful theatre, but, somehow, the Brea Plaza 5 managed to stay in business for over twenty years.

It was completely remodeled and renovated reopened by the Tristone Cinema Group on July 30, 2010. It was closed in October 2021.

This theatre outlived the UA theatres in the Brea Mall, and across from the Brea mall. I went to see a movie there before it closed and didnt make it in time, but the theatre was dirty, ugly, and empty.

If it wasnt for the fact that it was in a bad location, barely visible from the 57 freeway, it would have made a great art house for Regal.

I recently (9/07) went through the vacant Brea Plaza 5, here are some updates on the venue:

(From Captain Blood era)
Most of the interior was spray painted flat black and a few amatuer murals were placed around the building.
The original concesion stand was haphazzardly cut open in the center and a large peninsula was added. This poorly constructed addition consisted of exposed particle board and severly obstructed the tiny lobby.

(Post closing)
Obviously, teenagers managed to break in and use the building as a hangout at some point, as there is a great deal of graffitti and discarded bottles/cigarrette butts throughout the venue.
Perhaps related to the teens, all interior glass has been broken, day-glo paint is splattered randomly on the walls, and left over equipment/booth materials have been strewn about the building.
The box office and concession cabinetry has been torn apart.

While a heavy duty cleanup and a little TLC could bring this venue back to life, it appears the landlord has basically forgotten about or written the theatre off. I’d like to think someone will step in an give this theatre a new lease on life (there are definite posibilities), but it seems more likely to sit empty for years and eventually be gutted for a warehouse or storage facility.

This Halloween season (08'), the theatre is being utilized for a temporary, “Saw” themed, walk-through horror attraction.

The Fall of 09' will see the theatre utilized as a temporary horror attraction once again. However, this appears to be the venue’s “last hurrah”, as the property is advertising a major redevelopment for the overall complex; the architectural rendering appears to depict a new in-line “big box” center that would replace all of the existing structures.

To supplement my earlier profile; Mann opened the Brea Plaza, as a four screen, on 4/1/77.

Apparently, the Brea 5 will survive the mall’s remodel. Tristone Cinema Group (the same party that took on Anaheim’s Brookhurst and operates two other discount theatres) will reopen the Brea 5 sometime this year.

This theater is set to reopen as a discount house. It has been completely remodeled. It is supposed to open Friday, 7/30/10.

The new name of this theater is Brea 5 Cinemas.

The Brea Plaza 5 is now under new management, and has been taken in by the Tristone Cinema Group. We’ve completely renovated and remodeled the place, so swing by and take a look at how far we’ve come. Showtimes can be viewed at www.breaplaza5.com

Still open at the time of its post. Grand opening ads from April 1st, 1977 from the Register and the LA Times posted.

It looks like the end may have come for the Brea Plaza 5. The theatre has been dropped from Tristone Cinemas' website and is no longer listed among the property’s tenants on the BOSC Realty website. This past August the Orange County Register ran a piece on plans being submitted for a new apartment/hotel/office complex on the site.