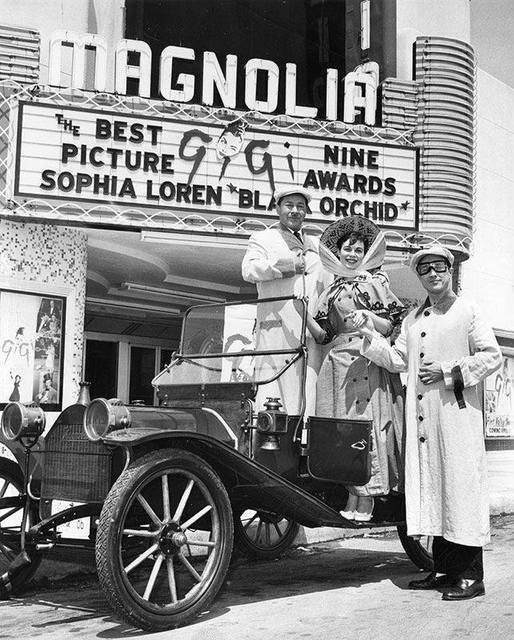 The Magnolia Theatre was opened on October 9, 1940. It had a rather ordinary Art Moderne façade and a very well maintained auditorium. It closed in 1979 and has been used most recently as a recording studio.

P.S. If anyone has any great pictures of this theatre I would be interested in purchasing those as well…..

As a resident of Burbank, I would love to see this terrific old theater restored to its former glory and used as a revival house/live venue.

Shawn (Juronimoo), what can you tell us about the building since you’ve acquired it? I have to assume that the floor is leveled and there’s little left to suggest it had been a theatre, but are there any artifacts left? Wall hangings, light fixtures, sconces, anything?

This is Virgil. I’m sure you remember me? Did you stay in contact with Ron and if so, where is he at these days.

Watched Pushover with Fred McMurray and Kim Novak today – the Magnolia Theater was in it.

Grew up a couple of blocks from this theater. Only have two specific memories:

1) Seeing “Dr. Strangelove” with my Dad (this would have been during it’s original release), and us being the only two people in the theater laughing.

I’d love to have someone set up a tour for theater enthusiasts. I’ve always been curious what the inside looks like (I know it was converted to a recording studio), and what theater features might still exist.

My Mom (85 yr old) did portraits of Yul Brenner, Debbie Rennalds, Elizabeth Taylor and a few others in 1957 that hung in the lobby of a movie theater in Burbank, but can’t remember the name of the theater. Does anyone know what theater this was, or have any info about their whereabouts? I’d love to see them. Thanks!! (949)463-9451

I was an usher at the Magnolia for a couple years while I was in high school. Eventually became assistant manager until I went off to college in 1962. The owner/manager, Jack Grossman, was a good friend of my father, who worked for Columbia Pictures. It was a beautifully run and maintained neighborhood theatre, down to the smallest detail, including excellent sound and projection. A large curved screen was installed while I was working there. The projectionist was fastidious about keeping the picture in focus, an art that seems to have been lost in subsequent decades.

The Magnolia can be seen in the 1975 Gene Hackman film “Night Moves,” between 8 and 11 minutes into the film. The Cornell is also glimpsed briefly in a drive-by just before this, but a whole scene is played out in front of the Magnolia.