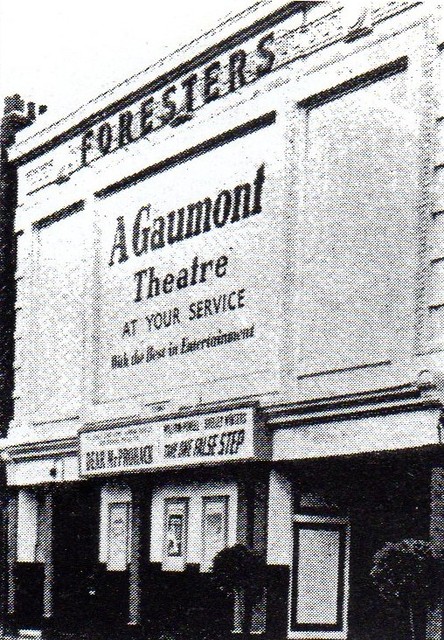 From 1912 it was licenced to screen films and in 1916 was re-named the New Lyric Music Hall and was also known as the Lyric Theatre. It closed in 1917 and remained closed until September 1926 when it was taken over by Lou Morris and re-opened as the Foresters Super Cinema. Architect George Coles had supervised alterations to the building and seating was provided for 674 in the stalls and 383 in the balcony. It was equipped with a British Thomson-Houston(BTH) sound system in 1931.

From 10th May 1937 it was taken over by Oscar Deutsch’s Odeon Theatres Ltd. chain but was never re-named ‘Odeon’. The Foresters Cinema suffered from war damage, but it struggled through the war, and was closed from 3rd May 1947 for repairs and re-opened on 10th October 1949 with Alan Ladd in “Chicago Deadline” and William Lundigan in “Follow Me Quietly”. It was then advertised as being part of the Gaumont circuit and the seating capacity had been reduced to 986.

The Foresters Cinema closed on 20th August 1960 with Charles Chaplin in “The Chaplin Revue” and Roger Mobley in “A Dog’s Best Friend”. The building stood empty and unused until around 1964 when it was demolished and a block of flats, Sovereign House, was built on the site.