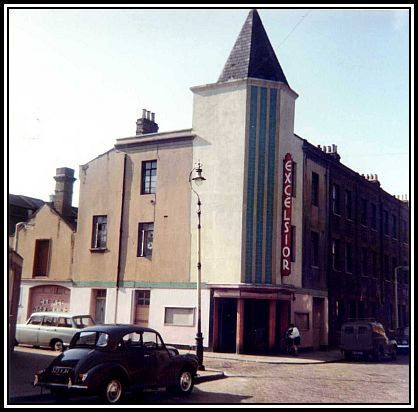 Located in the east London inner city district of Bethnal Green at the corner of Mansford Street and Florida Street. Originally built in 1889 as the Excelsior Hall & Swimming Baths. The original architect was A. Wooster Reeves.

In 1921 the building was converted into the Excelsior Kinema, to the plans of the architectural firm Emden & Egan. Minor reconstruction was carried out in 1926 by the firm of Frank Matcham and Company. The cinema ran a policy of films and variety, the stage being 18 feet deep and there were five dressing rooms.

In 1939 it was remodeled again, this time both the exterior and exterior were given a more modern Art Deco style by Maple & Company of London, one of the top interior designers and retailers of furniture at that time.

The Excelsior Kinema was always an independently operated cinema and it eventually closed on 13th August 1961 with Donald Crisp in “Greyfriars Bobby” and Brian Keith in “Ten Who Dared”. The seating capacity at closing was given as 661. It continued to screen Bollywood films for several years and operated as a Star Bingo Club on Sundays. Demolition came in 1969 and a housing estate was built on the site.

The conversion from swimming baths to cinema was rather quaint. The floor of the pool became the stalls, making use of the slope from shallow to deep end to provide the rake. Access was by the original stone steps leading from the old walkway around the pool to the floor of the pool. The walkway itself became an intermediate balcony on three sides of the stalls. Above this was another balcony, the old cast iron observation balcony from its days as a swimming bath. In 1928 Queen Mary attended a live show and film at the Excelsior, but by 1961 it was in a sorry state with greasy carpets, collapsing seats and a patched screen â€" a real life â€œSmallest Show On Earthâ€. A sad end to a lovely little cinema.

A couple of further comments. The conversion to a cinema came about because the the floor of the baths was badly cracked and beyond economic repair, at least for Oxford House, the charitable trust, which owned the building. They ran the cinema for a few years then sold it to a commercial concern. I never went in the top balcony, but the intermediate one was far from ideal. The back part was satisfactory, but when sitting at the sides, you had to crane your neck to see the screen and this got worse the nearer you got to it. When sitting in the rear stalls, your head was roughly on a level with the feet of the people sitting at the front of this balcony.

The Excelsior did not actually close on 13th August 1961. The final films advertised were indeed â€œGreyfriars Bobbyâ€ and â€œTen Who Daredâ€ and the following week full-time bingo was advertised, after which the local paper carried no further adverts. However, the projection equipment remained and the Excelsior later showed Indian films. I went to the cinema some time in 1962, when they had a horror week â€" different films each day – and saw â€œNight of the Blood Beastâ€ on a Wednesday and â€œThe Spiderâ€ and Cat Girlâ€ on a Saturday. I am positive of this because the first â€˜Xâ€™ film I ever saw was â€œThe Pit & the Pendulumâ€ (released in the UK in November 1961) at the Enfield Savoy, then â€œThe Gargon Terrorâ€ and â€œManbeastâ€ at the Tottenham Florida, then those at the Excelsior. (Being only 14, gaining admission to 16 rated films made a big impression.) Further corroborating evidence is that in May 1962 the exact same programme of horror films, even down to the days they were showing, popped up at the Canning Town Essoldo. I can only assume that some time before becoming an Indian cinema, they reverted to English films. As I have discovered from researching other cinemas, local halls did not always advertise.

Kevin;Many thanks for filling in this additional historical information on the Excelsior Cinema

A vintage photograph of the Excelsior Cinema in 1939, shortly after it was re-modeled:
View link

Don’t be fooled by the old car. This photo does not date from 1939. It was taken in or after 1960. The film advertised on the poster is “Confessions of a Counterspy”, which dates from that year. I know, as I have a print from the original negative and the title is quite clear. As can be seen, the building is very dilapidated – the X is even missing from EXCELSIOR on the canopy.

This used to be a wonderful cinema. The last time I went there was in October 1956 when it was still a decent place. I was sorry to hear how it deteriorated.