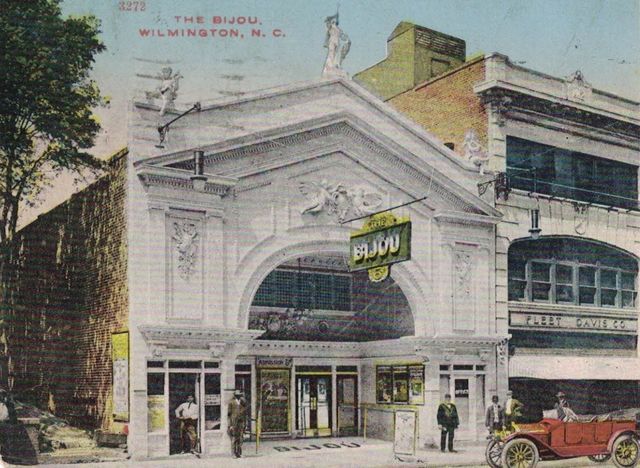 I found conflicting information on the Bijou theater in Wilmington, NC. It appears that the Bijou opened in 1904 using a tent for the theater. What appears to be a building in a 1906 photo is actually an entrance built in front of the tent making it appear to be a theater building from the front. Around 1912 a permanent building replaced the tent.

In the 1940’s, the Bijou Theater was operated by Paramount Pictures Inc. thru their subsidairy H.F. Kincey. Only one source gave a closing date and that was 1956.

According to Bowers' “Encyclopedia of Automatic Musical Instruments” page 551, there was a “Royal” theatre and also a “Victory” theatre in Wilmington, both equipped with Reproduco organs made by the Operators Piano Co. I could not find a page for either of them, so I am putting this here for the time being.

Here is a photo of the tile entry to the theater [ruin].

My grandfather was a projectionist at the Wilmington Bijou and my grandmother sold tickets at the Royal. I would love to see any pictures of those theaters if anyone has any. Thanks for the help.

The Bijou’s 1912 building was designed by architect Burett H. Stephens, who also designed the Victoria Theatre and the Royal Theatre in Wilmington. The Royal must be the one mentioned in comments by andrewb and debid above above. The Victoria might be the Victory mentioned in andrewb’s comment. Apparently neither of these theaters is listed at Cinema Treasures yet.

An impressively detailed history of the Bijou is available as part of the “Going to the Show” section of the University of North Carolina’s DocSouth project. There are several photos, including the two that were probably displayed at the now-dead links Lost Memory posted in 2006.

Among the abundant information on the UNC page, it says that the original Bijou, located at 205 N. Front Street, operated from December 22, 1906, until February 11, 1912, on which date its roof collapsed during a freak snow storm. This was while the new Bijou was still under construction.

The new Bijou opened on May 30, 1912. It had seats for 600 white patrons on its main floor, and had 200 seats for black patrons in its balcony. The balcony was raised and expanded in 1922, but the new seating capacity is not mentioned. The Bijou closed in 1956 and was demolished in 1963.

Architect Burett H. Stephens died the same year the Bijou closed. He had relocated to New Bern, North Carolina, by 1945, where he reestablished his practice. A successor firm, Stephens Architecture, P.A., is still in operation there. Unfortunately their web site doesn’t present any information about the founder or his works.

The Victoria Theatre turns out to be a missing aka for the Colony Theatre. See my comment of this date on that page for additional information.

The Royal apparently never had an aka, and is not yet listed at Cinema Treasures. Here’s a page about it at the UNC web site. All the pertinent information is there.