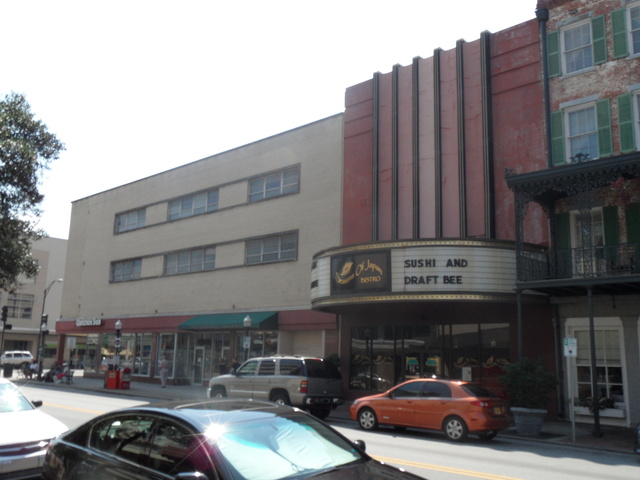 Originally opened in late-1911 as the Arcadia Theatre. It was renamed Roxy Theatre in 1941 and was owned by the Weis family, owners of the Savannah Theatre and the East Side Theatre, both in Savannah, as well as the Bibb Theatre in Macon.

The Roxy Theatre was demolished in 1954 and a Woolworth’s store was built on the site. The adjacent Avon Theatre still survives.

The June 7, 1941, issue of Boxoffice said that Fred G. Weis had recently opened the Roxy Theatre in Savannah. The item said that the Roxy was located on the site of the Arcadia Theatre, a Lucas & Jenkins house which Weis had taken over early in 1941.

Though the phrasing of the June 7 item made it sound as though the Roxy was new construction, a February 8 Boxoffice item about the takeover had said that Weis and his partners, operating as F&W Theatres, intended to remodel the Arcadia and perhaps give it a new name. As four months would have been little time for demolition and rebuilding, it’s most likely that the Roxy was in the same building as the Arcadia, which would thus be an aka.

Picture of the round marquee/entrance is/was the Avon (actual auditorium was across the lane on Congress St) I understand in early times there was a small theatre in this entrance section call the Bandbox. The Roxy was to the left of the Avon where Woolworths was later located.

Edit: Not Congress St, it was State St that was south of Broughton. The Avon auditorium was on State St.

“Historic Signs of Savannah,” by Justin Gunther (Google Books preview,) says that the Roxy Theatre was demolished to make way for a Woolworth store that was opened in 1954.

This is the Avon. The Roxy (my favorite dumpy theater)was on the corner of Abercorn and Broughton and became Woolworth’s.

The December, 1911 issue of Motography had this news about the Arcadia Theatre:

“The Arcadia theater, recently opened at Savannah by the Savannah Picture Plays Company of that city, is one of the nicest and most up-to-date moving picture houses in the South. The house has a seating capacity of almost 800 and was constructed at a cost of $40,000. The cost of admission is 10 cents.”