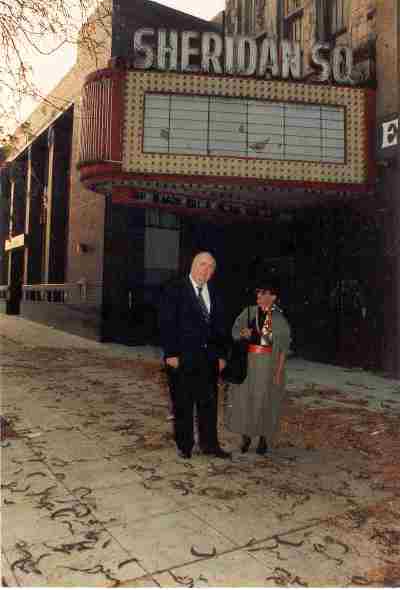 The Sheridan Square Theatre was opened as a vaudeville theatre on October 20, 1913, and in the 1940’s, it was operated by the Warner Bros Circuit. It closed June 1, 1977. It sat unused until demolition began in September 1987 and was finally demolished in summer of 1989.

Today, a CVS sits on the site of the former theatre which was located in the East Liberty section of Pittsburgh.

The beauty and nostalgia of those kind of marquees always knocked me out! Eventually, somebody out there has a 60’s photo of the nearby Cameraphone with similar marquee and will post it on the same website.

Here is a promtion only Gus Davis would think about.Back in those days Managers really were expected tp PROMOTE a movie. Mr.Davis, had a local horse dressed up to promote “HORSE IN THE GRAY FLANNEL SUIT” for kids to see.
Parents snapped pictures of the kids and the horse.That horse was in a real four piece gray flannel suit.
It was so popular in Pittsburgh,that the Horse was also at THE VILLAGE and WHITEHALL THEATRES. Feb 10 1969.

I have the resume of Edward J. Schulte who lists this theater as his design while working with the firm of Werner and Adkins of Pittsburgh, sometime before moving to Cincinnati in 1921. Schulte later became well known for designing churches and cathedrals.

sorry, my mistake— the firm Edward Schulte worked with in Pittsburgh to design the Sheridan Square Theater was H.E. Kennedy who had once worked for Werner and Adkins. He also claims designs for a Schenley Theater and Liberty Theater.

Gene Kelly worked there briefly in his teens, also, although I cannot specifically recall confirming that detail with him or with Gorshin. Although the Enright was the largest theater in East Liberty, the Sheridan Square was the neighborhood’s second largest and its crown jewel.

Final day of operation at the Sheridan Square, according to newspaper listings, was June 1, 1977 with “The Together Brothers” and “Capone”. The theater sat dormant until demolition started in September 1987 and did not finish until summer 1989.

Was watching Season 2, Episode 12 of a show called “Salvage Dawgs.” They were taking down a theatrical facade and they said it was the facade of the former Sheridan Square theatre. They said they were in Ohio though. However, the facade appeared to be an old facade attached to a newer building. Was it the facade of this theatre? I couldn’t find any clearer information. (Or a clearer picture of the facade to verify)