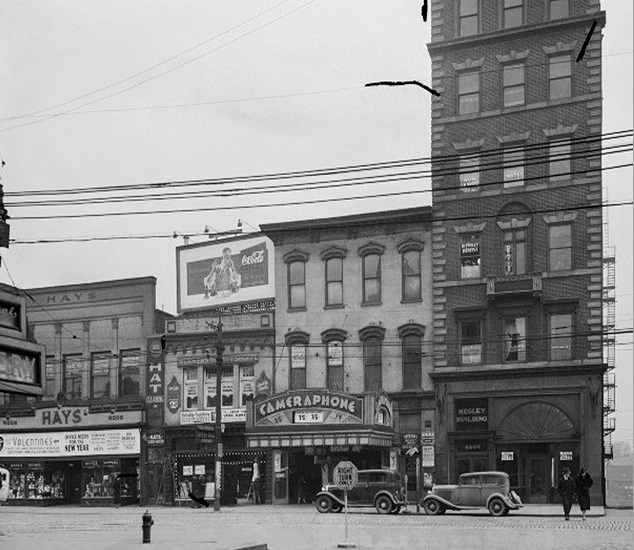 This 2004 article mentions the Cameraphone:
http://tinyurl.com/ynlktu

That is one of the coolest names for a moviehouse: Cameraphone. There’s a great photo of this theater in the local book “Pittsburgh: Then & Now”. I believe its last year was 1967, I’m not sure. If I can pinpoint the last day of operation in my continuing research on Pittsburgh theaters, I’ll post it.

A fine photo of this theater taken on February 10, 1935 exists at this url:
View link

The photo above shows view of the Cameraphone Theater, Werners Beauty Shoppe,and Hays Store along Penn Avenueas as seen from Frankstown Avenue.

The theater existed from 1915 (initial capacity possibly 850) through maybe as late as 1964 (776 capacity corroborated). Of the six East Liberty moviehouses that survived into the 1950s, it ranked fifth in the pecking order of when it played movies as they moved through the then-high-earning neighborhood.

Movies began their East Liberty showings at either the Sheridan Square or the Liberty (depending on the distributor) and sometimes the Regent, then moved on into mix ‘n’ match double bills at the Enright, the nearby Shadyside (often concurrently with the Enright) and finally the Cameraphone. (The Triangle got them last.)

The Cameraphone sometimes used the same double bills as the Enright, normally about two weeks later. Usually the bill of fare changed twice a week.

In January 1953 the Cameraphone had the exclusive rerelease of the landmark 1945 exploitation film “Mom and Dad” (1945), an occasion so heavily hyped for its daring content that the booking of the film condemned by the Legion of Decency led to the theater being placed off limits for Catholics for several weeks.

The picture played for 26 days, complete with gender-segregated showings daily and book-selling appearances by the ubiquitous Elliot Forbes, who was portrayed by different actors/lecturers in dozens of theaters around the country concurrently.

The success of the booking and decreasing attendance for late-run movies in the mushrooming TV era led the Cameraphone’s management to try racier fare (“We Want a Child,” “The French Line,” “Bitter Rice,” “Striporama”) with increasing frequency but with none of “Mom and Dad’s” exceptional success.

By 1955 the Cameraphone was trying triple bills of action films.

Advertising vanished from the daily newspapers during most of the theater’s final decade except when it joined the Art Cinema (Downtown) and/or several drive-ins in playing especially adult and softcore sex films.

The theater was razed in the mid-1960s and the property enveloped by the disastrous Penn Circle redevelopment. The specific plot of land once occupied by the Cameraphone became a lawn with benches, a small traffic circle and possibly part of the busway.

The relatively narrow theater was characterized by the fact trains passed by behind its screen wall and by the slightly musty smell of its popcorn and aged carpeting. Theater maintenance was functional at best.

There was a vestibule and a concession area, but minimal separation of the lobby from the auditorium, so that if one entered the theater before an earlier performance had concluded, it was almost impossible not to be aware of what was happening on screen.

Its name was way ahead if its time.

These dates are unconfirmed as there is no indication of a grand opening, but the first ad I found for this Cameraphone (as well as two others in Pittsburgh) was from March 2, 1913. This one, the best known of the three, opened on March 6 with the silent short “Pickwick Papers' starring John Bunny. The last ad I came across was from January 31, 1967, by which time the Cameraphone was an adult cinema (I’ll be looking for the transformation date soon). The features that day were "Everybody Loves It” and “Tales of a Salesman”.

The East Liberty Cameraphone dates to 1908. It was one of five Cameraphone theaters that were opened that year by T.M. Barnesdale. Three of them, including the East Liberty house, presented early talking pictures. The experiment with sound soon failed, and the theater was taken over by H.B. Kester and W.C. Beatty, who operated it as a regular silent movie theater. The house opened with 400 seats, was expanded to 700 seats in 1910, and expanded again to 900 seats in 1914.

Trade journal The Moving Picture World had an article about Pittsburgh area exhibitors in its issue of July 15, 1916, and it included a section titled Kester and His Cameraphone. Kester operated the East Liberty Cameraphone at least as late as 1926, when it was mentioned in the Film Daily Yearbook.

The 1941 Catalog of Copyright Entries from the Library of Congress includes a copyright issued to architect Victor A. Rigaumont for: “Alterations to Cameraphone theatre, 6202 Penn Ave., Th. Ward, Pittsburgh. Â© June 3,1941” There’s no indication of how extensive the alterations were.

I posted 2 pictures of The Cameraphone Theatre Token. How old might the token be?