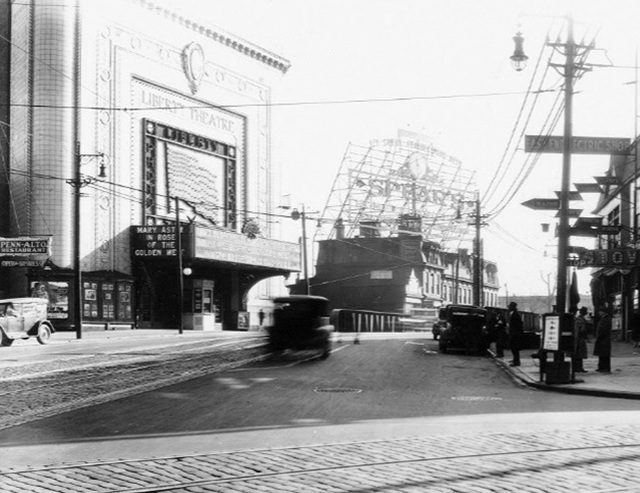 This is the Liberty Theatre in the East Liberty section of Pittsburgh, and not to be confused with a theatre of the same name which was located on Liberty Avenue downtown. From an old photo I saw, this looked to have been a large place. It was listed in the 1914-1915 edition of American Motion Picture Directory at 6113-6115 Penn Avenue.

A September 20, 1965, Boxoffice item said that the Liberty Theatre “…folded last week and was dismantled.” Dismantled, in Boxoffice jargon, usually means all the seats and equipment were removed. The item said the house had been built fifty years earlier, for the Rowland and Clark circuit, but was later sold to Warner Bros. and then operated by Stanley Warner before being sold to its last operator, Associated Theatres. The local redevelopment authority had bought the Liberty from Associated.

The Arcadia Press book “Pittsburgh’s East Liberty Valley” says the Liberty was demolished in 1968. There’s a photo dated 1915, which was probably the opening year, and the caption names Henry Hornbostel as the architect.

I’m surprised to learn that Hornbostel designed a theater— he’s best known for his grand Beaux Arts projects such as the original plans for Carnegie-Mellon University, and some two dozen of his buildings are on the National Register of Historic Places. It’s too bad that what was probably the only commercial theater he designed has been demolished.

Joe, That Boxoffice issue errs on at least one major point. For most of the years of its existence, the Liberty was part of the John P. Harris chain, which included the Harris (Downtown), the South Hills (Dormont), the Denis (Mt. Lebanon) and the Perry (Perrysville).

In an item in the January 5, 1914, issue of the journal American Stone Trade, architect Henry Hornbostle, to whom two sources that I know of attribute the design of the Liberty, was said to have “approved” the plans of the Schenley Theatre, a project designed by the architectural firm of H.E. Kennedy & Company.

On the Sheridan Square Theatre page, a comment by Denis McNamara (probably this architectural historian, by the way) says that architect Edward J. Schulte, who was working in Kennedy’s firm during the period when these theaters were built, listed the Sheridan Square, Schenley, and Liberty on his resume.

Despite the source I cited in my earlier comment above, and the book about Hornbostel reviewed here, I’m now wondering what roles Hornbostel and Schulte each played in the design of the Liberty. Unfortunately, there is much more information about the Schenley than the Liberty on the Internet, so I’ve been unable to track down any references from the 1910s that would confirm Schulte’s involvement in the project.

I’ve found nothing published prior to 2002 that mentions Hornbostel in connection with the Liberty, either, and I still find it odd that so restrained a classicist as Horbostel would have designed a theater that, as described by the book review to which I linked, featured “…white, glazed terra cotta tiles framing an American flag composed of red, white and blue light bulbs.”

I’m wondering if this item from The Moving Picture World of April 10, 1915, could have been about the Liberty Theatre:

“The moving picture theater to be erected on the property of the Nicola Land Company, On Penn avenue, near Frankstown avenue. East End, Pittsburg, Pa., is to be completed by October 1, as ground will be broken for it around May 1. Plans of the building are being hurried to completion by H. E. Kennedy & Company and call for a seating capacity of 1,550. The building will front 100 feet on Penn avenue and will have a depth of 171 feet, making it the largest motion picture theater in the city, and with its numerous unique features, its owners mean to also make it one of the most attractive in the country. There will be no storerooms connected with it, which omission will give the building a most imposing appearance, and will allow a much handsomer front than would be possible if there were stores alongside the entrance.The mention of H. E. Kennedy Company as architects is especially interesting in light of Edward J. Schulte’s claim that the designed the Liberty Theatre while working in the Kennedy Company’s office. The Liberty as built doesn’t perfectly match the description of the unnamed theater in the article, but the location appears to be right, the size is close, and the absence of any shops in the Liberty building matches the proclaimed desire of the owners of the mystery project.

This Liberty Theater was, indeed, near the beginning of Frankstown Avenue in Pittsburgh’s once-thriving East Liberty neighborhood.

As I recall, the Liberty Theatre had a giant electric sign of an American flag, in neon and sparkling lights, above the marquee. Very imposing. The father of my then-best friend used to take us out to out-of-the way local theatres to movies. I remember his taking us to a local showing of “The Fall of the Roman Empire” there, probably in mid-to-late 1964. It did seem like a movie palace at the time, set amids what must have once been a major shopping area, but which, even in 1964, had clearly seen better days. I suspected the electric American flag had been added in the 40’s, but I could be wrong. (Many local theatres had Art Deco facelifts in the 30’s and 40’s.)

Opened December 27, 1915 with the Triangle films, “Edge of the Abyss” and “The Submarine Pirate.” All 1,467 seats were filled at the open. A $15,000 Austin organ played by E,J. Napier along with a Parlor Grand Chickering piano entertained the patrons. Raymond H. Allen was the manager on behalf of the East Liberty Theatre Co. Circuit that operated the theater.

The H.E. Kennedy & Co. teamed with Palmer and Hornbostel to achieve architectural plans that were said to be an homage to the NYC Strand in a more miniaturized form. It was Hornbostel that is credited for the exterior with its distinctive white, glazed terra cotta tiles that framed a patriotic World War I era American flag illuminated by red, white and blue light bulbs. The victim of both end of lease issues and eroding patronage, the Liberty shuttered just shy of its 50th anniversary and was bulldozed four years later after being defaced by vandals. 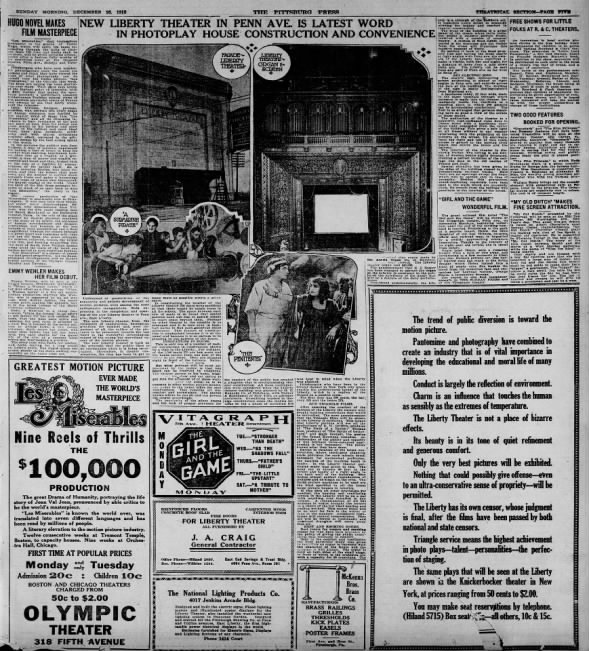