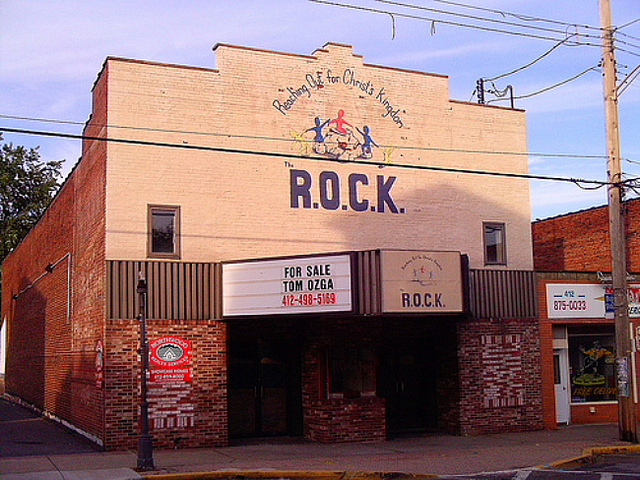 The West Park Theatre was opened by 1932. It was remodeled in 1938 to the plans of architect Samuel Barbalat and reopened as the Parkway Theatre. It was still open in 1957. After being used as a church & youth center, the building was sold in October 2011, with proposals to reopen as a movie theatre. It reopened in 2014.

It appears to be a church now:
http://tinyurl.com/beprml

The former West Park Theatre was scheduled to open soon as the Parkway Theatre, according to Boxoffice of November 16, 1935. It had been entirely remodeled inside and out. The house had been closed for about two years before the remodeling began, according to an earlier Boxoffice item. I’ve been unable to discover when the West Park opened.

The Parkway was closed for several months following a fire in late 1973, according to a February 11, 1973, Boxoffice item announcing its reopening.

The second paragraph of my previous comment should read “…a February 11, 1974 Boxoffice item.”

I drove past the Parkway earlier this week and saw FOR SALE signs on the marquee. Could we see a possible comeback here?

I just closed on the Parkway October 10th,2011 Plan on reopening the theater as a 80-100 seat film center. With a Restaurant/Bar in the front. There are so many films that this theater will introduce to the public. Foreign,indies and classics. Will also have live entertainment-mainly Jazz. Lots of Garbage was left behind-been in there cleaning it out. More info to come later.

Good Luck on your restoration! I only got to go to the Parkway once,but I can still remember it. I got there early for the feature and I have a picture in my mind of a long hallway to get to the men’s room, which I needed to use badly after the bus ride and walk to get there. Oh, by the way…the movie was great…it was “The Wind and the Lion” with Sean Connery and Candice Bergen.

The Parkway Theatre underwent another remodeling in 1938, as noted in the November 12 issue of Boxoffice:

“McKees Rocks, Pa. — Parkway Theatre is undergoing extensive remodeling and will be closed until Christmas, Al Glazer, proprietor, stated this week. A glass front and a new marquee are being installed. The auditorium also is being decorated. Sam Barbalat is the architect on the remodeling.”