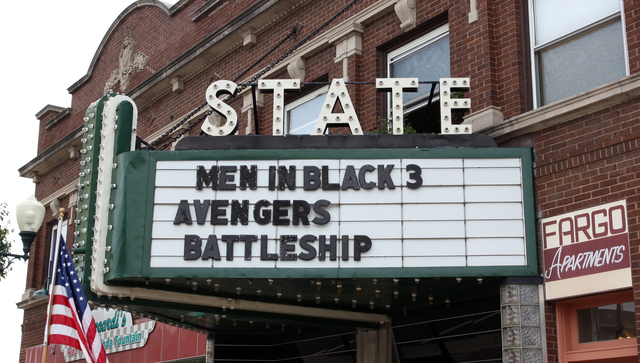 It became a theater once again in the late-1980’s and was completely renovated by a private individual with the desire to run films and have live musical entertainment. The idea collapsed quickly and the theater remained closed in spite of having just been completely renovated.

In 1990, Main Street Theatres bought and reopened the State Theater after splitting the main floor into two theaters. A year later, the stage was converted into a third screen and the now triplexed theater still shows first run films today. Seating capacities are: 208, 188 & 160.

This is the current owner of The Sycamore State Theatre. The theatre was built in 1925 and opened in December 12 of 1925. It opened under the name The Fargo Theatre. In 1940 Fargo sold the theatre and it became the state theatre. The theatre has 3 theatres, number 1 has 208 seats, number 2 has 188 seats, and number 3 has 160 seats. The phone number of the theatre is 815.895.2301. You can also call that number to get information.

There seem to have been three Fargo Theatres in the area. The others are listed here as the Geneva which is clearly a sister theatre to this, and the (New) Fargo. As of 1930, the Geneva theatre had been renamed, this was known as Fargo, and the one in DeKalb was known as the New Fargo. All were owned by the Polka Brothers circuit of Maywood at the time, along with the El Tovar, Deerpath, Pickwick, and Des Plaines. In 1923 they also owned the New Maywood, Yale, and Melrose Park.

Here is a February 2007 photo:
http://tinyurl.com/lzggbv

I just shot a couple of pictures of the State while on the way through Sycamore at sunset yesterday. Here are links to them:

Theatres are one of my photographic ‘collections’; I have a bunch more to post when I get the time.