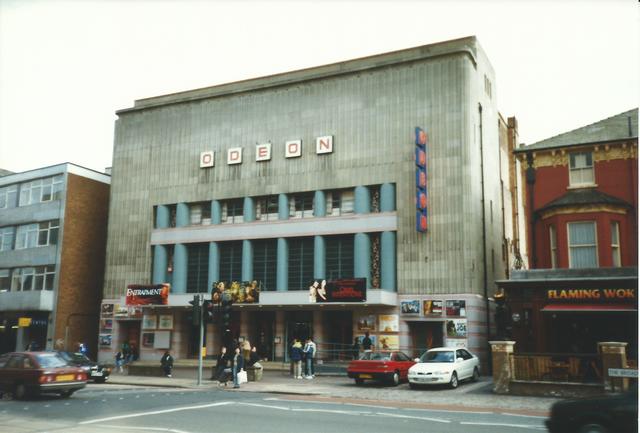 Located in the southwest London district of Wimbledon. This originally opened as the Regal Cinema on 20th November 1933 with Buck Jones in “The California Trail” and Anna Neagle in “Bitter Sweet”. It was built for and operated by County Cinemas chain and they employed noted cinema architect Robert Cromie to design a splendid addition to their circuit of cinemas.

Designed in an Art Deco style, the magnificent murals and designs within the building were carried out by famous interior decorators Mollo & Egan. Organist Reginald Foort was commissioned to design a special console for the Conacher 4Manual/20rank organ that was installed in the cinema and he was billed on the opening night ‘at the console of the Regal 'wonder’ organ'. Seating was provided in stalls and balcony, the stage was 25 feet deep with a proscenium width of 48 feet. There were twelve dressing rooms which in the early days were well used when variety acts provided part of the cinemas programme. The Regal also had a cafe for the use of patrons and the general public.

County Cinemas were taken over by the Oscar Deutsch chain of Odeon Theatres in September 1939 and it became a second cinema in Wimbledon as they already had a purpose built (in 1936) Odeon Cinema on Worple Road. The Regal was re-named Gaumont from 28th November 1949 and was finally re-named Odeon from 9th September 1962 after the original Worple Road Odeon had been closed. The magnificent Conacher organ had been broken up for scrap and removed from the building in 1958.

In November 1972 it was divided into a triple screen cinema with the former balcony seating 705, and two mini cinemas in the rear stalls seating 128 and 107. Further alterations occurred in 1979 when the two mini-cinemas were enlarged to seat 218 and 190. In 1991 two further screens were added one seating 175 in the former front stalls area and a 90 seat screen located in the former cafe. Little remained to be seen of the original decoration in this multi-screen venue.

The Odeon was closed on 1st December 2002 when a new purpose built 12 screen Odeon multiplex cinema was opened in Wimbledon. The former Regal/Odeon was demolished in May/June 2003 and an office block for the Chartered Institute of Personnel & Development was built on the site.

I have got some very good memories of this cinema. I managed it for 8 years before taking up a managerial position in the West End.