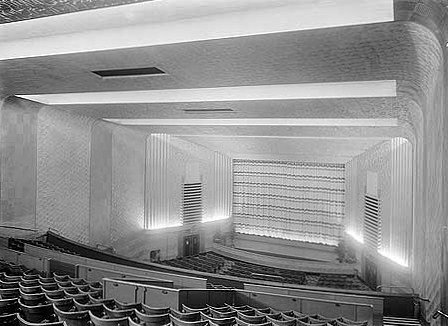 Located in the southwest London district of Wimbledon. Originally in 1914 the 350 seat Queens Picture Theatre was built and opened on this site. In 1925 it was re-vamped and re-named New Queens Cinema, renamed Phoenix in 1931 and in 1932 it was finally re-named the Savoy Cinema. The Savoy Cinema was demolished in 1935 to make way for a newly built Odeon Theatre to be erected on an expanded site.

The Odeon was built by Oscar Deutch for his Odeon Theatres Ltd. chain and it opened on 20th April 1936 with Tom Walls in “Pot Luck”. The architectural firm of Yates, Cook & Darbyshire were commissioned to design this, their fourth and final cinema for the Odeon chain. The building was considered to be quite ‘dull’ and uninspired both externally and internally and had a long narrow auditorium with a stepped ceiling containing lighting troughs. Seating was provided for 924 in the stalls and 577 in the balcony.

The Odeon closed on 26th November 1960 with Donald Sinden in “The Seige of Sydney Street” and Audrey Dalton in “This Other Eden”. The building was demolished and a Lidl Supermarket with an office block currently stand on the site.