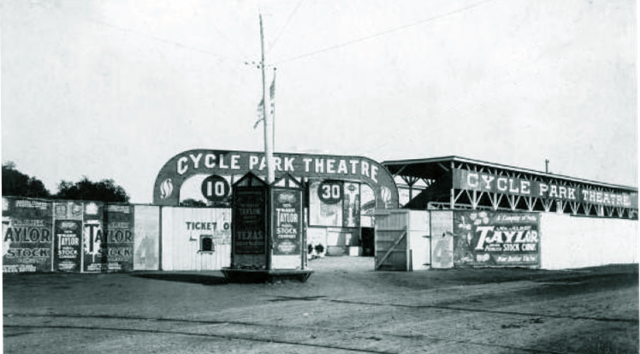 This is actually the Cycle Park Theatre, an outdoor facility built by Charles R. McAdams, Jr. launching in 1898. It is just three blocks from the Fair Theatre so is included here although the facilities overlapped just four in their business lives (1921-1925 when the Parkway Theatre launched later becoming the Fair Theatre).

The picture is of the second official Cycle Park Theatre at 1009 S. Second St. The Cycle Park featured some outdoor films run by early Dallas movie exhibitors and live theatrical showmen Brown & Stennet. The facility was expanded in 1920 officially becoming the third Cycle Park Theatre only to burn down again due to lightning striking it in May of 1922.

The third Cycle Park was built quickly and launched in June of 1922. Apparently, too quickly as just a year later the platform collapsed injuring many patrons. Rebuilt one last time and remaining in operation until 1925, it was discontinued and then demolished. But just yards away from where it once stood is the Fair Park Music Hall aka Fair Park Auditorium.