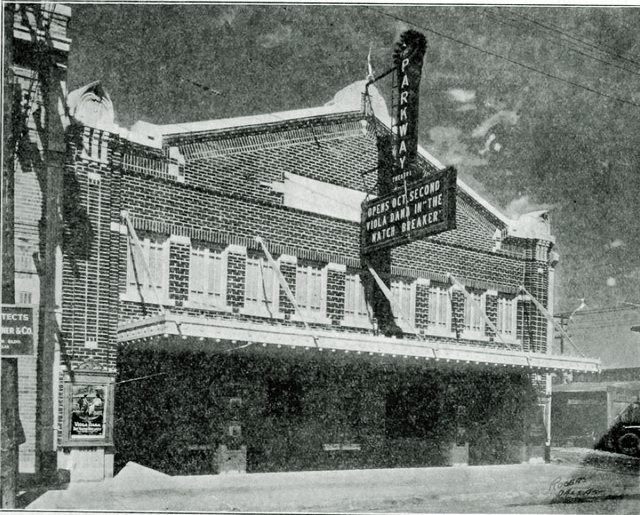 Opened in 1921 as the Parkway Theatre. The Fair Theatre was operated by R.Z. Glass, owner of the Lawn Theatre and the Knox Theatre in 1935. By 1941 it was operated by Paramount Pictures Inc. through their subsidiary Hoblitzelle & O'Donnell. In 1945 Interstate Theatres Inc. operated it and it was converted into an African-American theatre in 1950.

It was destroyed by fire in 1950, reportedly by bombing, shortly after it converted to show ‘race’ films'.

In 1935 owned by R. Z. Glass, owner of the Knox Street and Lawn Theaters in Dallas.

Converted to “Negro House” in 1950 and five months later destroyed by fire.

Bombing race-motivated or insurance claim on a venue no longer “viable”? Intriguing.

I believe this theatre originally opened as the Parkway Theatre in 1921, part of vaudevillian Eddie Foy’s chain of neighborhood theatres. Foy also opened the Oak Lawn, which was later renamed the Lawn, as well as several other Dallas area venues.

The 900-seat Parkway Theater opened Oct. 2, 1921 with “The Match Breaker” at 3709 Parry next door to the Fair Hotel and directly across from the main entrance to the Fair Park fairgrounds. It was Eddie Foy’s sixth theater in his circuit that then was comprised additionally of the Bluebird, Ideal, Colonial, Columbia and Rialto. The theater was billed as the largest neighborhood in the Southwest. Its grand opening festivities took place a week after its first film ran with Carl Weisemann brought in to play what was billed as Dallas' largest theatrical organ, a $15,000 instrument. Weisemann accompanied the film, “The Inner Chamber.”

Knox St. Theater owner Robert Z. Gless took over the theater In March of 1933 and reequipped and redecorated the theater and renamed it The Fair Theater due to its proximity to the fairgrounds. Within days of re-opening, the theater suffered major hail damage, shattering the glass doors and windows. Five feet of water flooded the newly remodeled theater. Gless re-reopened the theater and experimented both with suburban fare and African American bookings at midnight. Gless opened the Lawn Theater in May of 1935 and would sell the Fair to the Interstate Circuit. Interstate’s operation of the Fair was similar to Gless' with a mixture of African American fare, suburban fare though regular kiddie matinees monthly.

By the late 1940s, the Fair’s audience was evaporating and Interstate positioned the theater as a low-price theater with continuous shows ranging from 25 to 35 cents and children 9 cents at any time. Interstate dropped the theater and it closed for a short period. H.L. Fagan and A.Z. Choice who ran an African American theater called the Star Theater on Moore Street took on the theater Feb. 1, 1950. They received ominous phone calls telling them to “give the theater back to the whites.” Within weeks of opening the theater, what has been described as a fire bombing took place and the theater’s roof collapsed and destroyed the theater and damaged four rooms of the adjoining Fair Park Hotel. The building was a total loss and demolished.

Regarding a question posed in an earlier comment: Because Choice and Fagan were subleasing the theater, there’s little chance that they would have set fire to the property. Further, the owners of the building — Midway Realty — told inspectors that they, too, had heard from multiple persons in the neighborhood that the theater should not be African American owned and operated.

J.F. Woerner & Co. was the architect for the Parkway Theatre with the $15,000 organ as a Hilgreen-Lane instrument with two manuals and pedals.