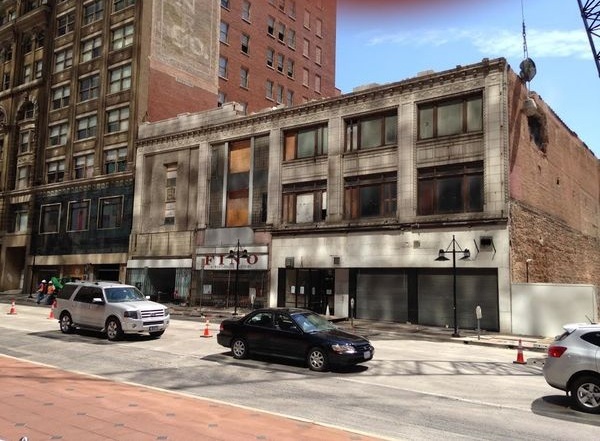 The Crystal Theatre was opened in 1911. It was demolished in October 2014.

I get a 404 Error page when I try to access Joe’s article, so I’ll post a bit of info here that may be covered in his article.

Originally opened in 1911 at 1608 Elm (south side of the street) by G.K. Jorgensen, who operated an early Texas theater chain based in Galveston, and who built the Crystal before the trend of film theaters being located on the north side of Elm was firmly established.

In 1926, the lease was held by W.G. Underwood, later of Underwood & Ezell, who operated many walk-ins and drive-ins in Texas. His lease was due to expire in 1928, at which time the space would be remodeled into a McCrory’s store.

The building still stands, and abuts the building that was the site of the original Titche-Goettinger store in Dallas.

That building (site of original Titche’s store) is the Wilson Building extension, which puts the Crystal right across the street from the old Washington Theatre (built the year after the Crystal), which itself was right next door to the Palace (built 1921), although it predated the Palace by about nine years. The Washington closed in 1927 and was demolished in 1932.

For a few years, then, this 1600 block of Elm was really a hub of motion picture activity.

Motion Picture Times, to which I linked in my earlier comment, is no longer available on the Internet. Eventually, it will probably be reposted at Boxoffice Magazine’s own web site. So far they have posted only issues as far back as 1935.

I wonder if the Crystal Theatre opened by G.K. Jorgensen in 1911 was in an existing building. It seems likely in light of this article from the April 9, 1913, issue of trade journal American Architect and Architecture:

“Dallas.â€"G. K. Jorgensen will erect a new $100,000 moving picture theater on the site now occupied by the Crystal Theater on Elm St., between Stone and Ervay. Plans are now being prepared by Architect I. A. Walker, and will be ready for bidders about June 1.”

If Jorgensen was even considering demolishing the theater and replacing it, the building must have been more than two years old. I’ve found no later information about the project, so I don’t know if it was carried out or not, but if the building at 1608 Elm is still standing, as matt54 said it was a few months ago, it should be possible to get its year of construction from the city’s building department, or perhaps the local tax agency.

Map view couldn’t be more wrong, as it is nowhere near Dallas’s old Theatre Row. Address should be amended to “1608 Elm Street.” Building is still there and its appearance is remarkably like it was when it housed the Crystal.

I just updated the street view (hope it sticks) to the building at 1608 Elm that once housed the Crystal Theatre – directly west of H.L. Greene’s Drug Store in the old Wilson Bldg. at the corner of Elm and Ervay (also former site of the original Titche’s store, before they moved east on Elm to a location across from the Tower Petroleum Bldg.), and directly across Elm from the present-day Thanksgiving Tower monstrosity at 1623-25 Elm, formerly the site of the Palace Theatre.

The long-missing Motion Picture Times article about the dismantling of the Crystal Theatre in 1928 can now be found at this fresh link.

The article notes that the Crystal was expanded after the construction of the larger Washington Theatre across the street. That expansion, which doubled the width of the theater, must have been the project noted in the April 9, 1913, issue of American Architect and Architecture. I think we can safely list I.A. Walker as the architect of the Crystal Theatre.

Very interesting, Joe – thanks for reposting!

Sad to say.. The structure that once was home to the Crystal Theatre has been demolished! This occurred around Oct/Nov of 2014.. RAC Photography

In the realm of Dallas trivia, if someone were to ask which Dallas movie theater originally constructed as a movie theater was the first one able to survive 100 years, you’ve found your answer. The Crystal Theater building actually survived a century in demolition-happy Dallas, Texas. In the store-show era of movie exhibition, the Crystal was like the Candy, Princess, Dalton and many others housed in converted retail spaces. Dallas movie pioneer and capitalist W.D. Nevills had the most downtown theaters but George Jorgenson had one of the largest with the converted retail space known as the Crystal Theatre at 1608 Elm Street. Jorgenson had seven store shows in Galveston but knew bigger coin could be had in downtown Dallas.

Nevills decided the time was right to move past the “store-show” concept and project to more people simultaneously. He launched the Washington Theatre at 1615 Elm St. as the first movie palace built for photoplays in Dallas seating 600 people. It opened Thanksgiving Day 1912 and moviegoers lined up there. For Jorgenson peering across the street and seeing this, it must not have sat well. Meanwhile, a block away work was almost completed on an even more oppulent movie palace, I.A. Walker’s awesome Queen Theatre. For Jorgenson to survive, there were few options.

He was able to secure a bit more land – 25 feet to the east adjoining 1608 Elm and had his store-show theater razed. Using Queen architect Walker and $100,000, the new Crystal would one-up the Washington – both of which launched with short-term leases. Jorgenson and Walker also carved out space for retail and office space above the theater just to secure additional sources of revenue. On September 25, 1913, an audience filling each of the theater’s 600 seats saw the grand opening feature of “A Sister to Carmen.” Audiences were impressed with Walker’s Oriental design starting with its lobby with a fresco of a Japanese love story and oversized Japanese lantern at its center. As the theatergoer’s path continued complete with Japanese art, they would notice the Oriental light fixtures, elevated boxes, and main auditorium – a joss house temple creation. Gaudy but nice. At the $10,000 Wurlitzer pipe organ the first night was Carmenza Vendeless of Chicago who said that while there were bigger houses in Chicago, nothing could compare to Walker’s Queen and Crystal in downtown Dallas.

The Crystal became known as one Dallas’ “Big Four,” along with the Washington, Queen, and Hippodrome. The competition was pretty fierce. Jorgenson managed to wrestle the Universal Film Studio contract away from the Queen in the fall of 1913. The Queen siezed the General Film Company contract (Edison, Mélies, Biograph, Lubin, Pathé, et al) away from the smaller Washington. And the Hippodrome retained Mutual Films.

P.G. Cameron would take on the profitable Crystal for Southern Enterprises. But times were changing rapidly in downtown Dallas. The Big Four were under big pressure in the early 1920s with the creation of the Palace, the Majestic and others. Cameron would move on to greener pasture locations and W.G. Underwood would become the third operator of the Crystal. Across the street, the Washington was done after its 15-year lease cycle (a 5-year and 10-year) was up in 1927 and would be demolished not long after. Underwood would finish out the theater’s 15-year lease (one 10-year and one 5-year) and move to the Pantages renaming it the Ritz. The Crystal would be spared as a building, however, because of its multi-use construction and existing clients including Kushner Brothers Men’s Store. Walker’s Oriental designs were removed and theater gutted to create additional retail space. The Crystal became home to many clients with the lobby becoming a long-running Bakers Shoe store and, in the 2010s, the Donut Palace.

So while the Crystal didn’t go out as a movie palace after over 100 years in downtown Dallas, at least it was a palace for donuts. Sadly, the building was largely overlooked for its significance as the last remaining homes of Dallas' “Big Four” in early silent film exhibition.

The 1928 Motion Picture Times article about the dismantling of the Crystal Theatre has been moved again to this link.