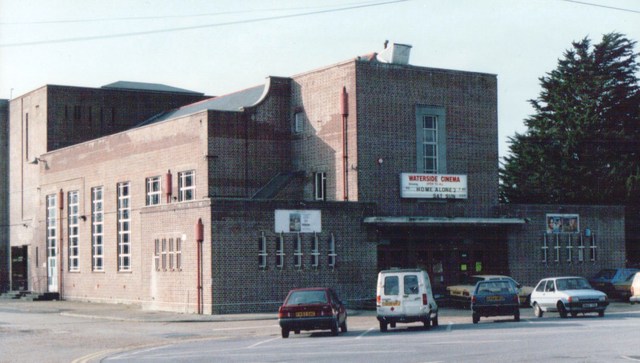 The Waterside Theatre is at Holbury on the edge of the New Forest near Hythe in Hampshire. It was built by the Esso Petroleum Company Ltd. in 1950 as an amenity for the local community and is located alongside the Sports & Social Club. It is now managed by the Esso Recreation Club.

The theatre was originally equipped with a cinema screen and projection room but, as with many provincial cinemas, the arrival of the multiplex cinemas took their toll and the screen was removed in 1997. The subsequent removal of the fixed seating has allowed the auditorium to be used for a variety of functions that were previously not feasible.

The theatre had seating for 300 people with a licensed bar. The stage has an 8.27m wide proscenium with sixteen full height fly-lines. The control room, which was previously the cinema projection room, is now equipped with a sound mixer desk and a 36-channel memory lighting console. It was the home of the Esso Music and Drama Group, who staged two plays and either a musical or pantomime each year, in addition to providing technical support to anyone using the facilities.

Waterside Operatic Society traditionally staged one major production each year at the Waterside Theatre, in October/November. In addition, there was often a concert in the spring which is performed at a variety of venues to raise money for charity.

The Esso Cinema has been closed for many years and is boarded up and awaiting eventual demolition in summer of 2020.

Contributed by The Waterside Club
Get Movie Tickets & Showtimes