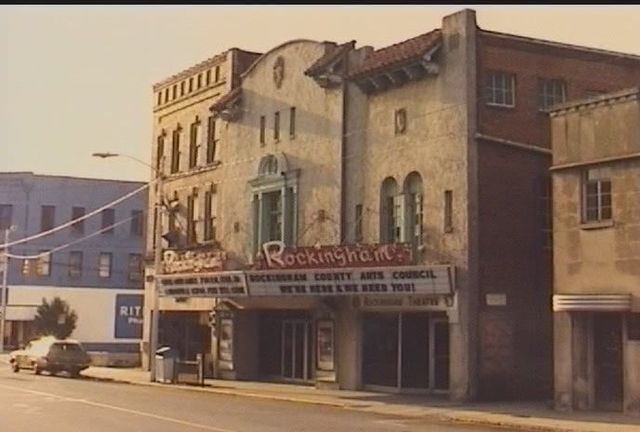 Built in 1929 with a design by Western Electric. The theatre was completed just before the depression. It is partially restored to utilize a lot of the existing design. The balcony is still open. The screen is actually mounted on a stage that has stage lighting where live shows took place. The dressing rooms still exist behind the stage. The projector room still has the fire doors and metal sliding doors from the days of nitrate film. It also still has the orchestra pit. It was privately owned and operated and closed by fall of 2019.

The theatre was formerly owned and operated by Bill Hendrix who also operated a Drive-In in Reidsville. The theatre was upgraded with xenon lamps, platters, and sound equipment. It was reopened under independent ownership with new seating and other improvements.

there was also a Reidsville Drive-In that was located off Highways 29 and 158 that is not listed on this site.

As of this writing,the ROCKINGHAM THEATRE remains the only movie theatre in Reidsville and all of Rockingham County,North Carolina.

The Grand Theatre appears on the 1922 Sanborn map of Reidsville. It had a balcony and a stage, and presented moving pictures and vaudeville.

DocSouth lists C. W. Davis as the manager of the Grand. An item about the opening of the Rockingham Theatre that was published in the January 4, 1930, issue of Motion Picture News (left column) praises C. W. Davis’s promotion of the opening of the Rockingham. It reproduces a small scan of one page of a special newspaper section about the theater. Unfortunately, it doesn’t give the date of the edition.

The Rockingham’s web site says that the theater was designed by Western Electric, but as far as I know that company only designed theater sound systems, and worked with theater architects advising them on ways to get the best acoustics for amplified sound in their theaters. I haven’t been able to discover the actual architect of the Grand or the Rockingham. It might be given in the newspaper section mentioned in the Motion Picture News item.

Wonder what happened to the beautiful marquee that donned this building in the above picture. Happy to hear it is still in operation though. Has it made the conversion to digital yet I wonder?

Actually Western Electric did play a part in the Rockingham Theatre. This was one of the very first theatres built for Sound according to long time friend, the late Bill Hendrix. Most theatres of that day were former vaudeville houses.

205 Gilmer Street is the proper address.

Status should be closed. The website carries the message that they have closed and so does their Facebook page. The phone has also been disconnected.