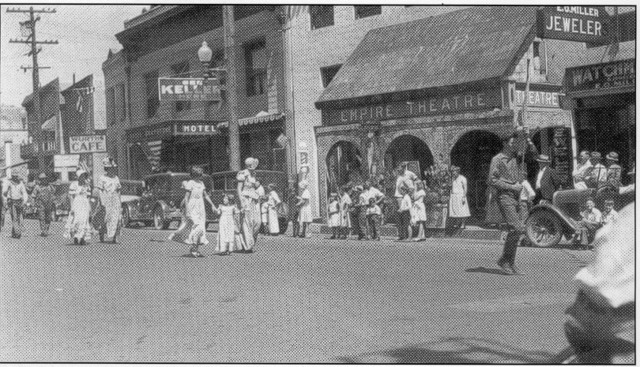 The Empire Theatre is located in downtown Placerville, California (about 50 miles east of Sacramento, in the Sierra Nevada foothills). It was built in 1929, opening on September 19, 1930. Twenty years ago there were sporadic live performances, maybe movies too. It was twinned in the 1990’s. Now it is an antique mall.

yep- Cinema 4 has a familiar ring to it… I remember since they both belonged to the same company, we were able to go to movies at both for free. If there was room… lol

I worked there during its conversion from a single screen to a twin screen. This was in the early summer of 1988. It was nothing short of butchery.

I’m surprised to hear that the theatre was built in the 1929. The following picture makes it seem as if it was there at least in the mid to late 19th century.

Dear Rainestorm, The reason the picture seems older than 1929 is probably due to the costumed parade participants. I assume a “Wagon Train Days” parade is in progress. The structure under the marquee is a built up “set” as part of the theme of the festival celebration. In another picture taken a year or two later you can see the same marquee without the set beneath it and the cars of the period parked along the street. The Empire was built new in 1929 because of a fire of the Elite Theatre that was down the street closer to the Bell Tower, robbing the town of its entertainment venue. Actually the Empire opened in the fall of 1930 with the film GOOD NEWS.

Hi, Michael. I was actually referring to the photo that I pasted the link for. Here’s one that’s dated 1849.

So it has to be as old as Placerville itself.

Rainestorm, Yes of course, but that 1849 theater is not the building on Main Street today. There was another Empire Theater between the one pictured in the 1849 photo and the opening of the current building in 1930 as well—very fancy and equal to the fine San Francisco theaters of the day. It burned in one of the many town fires. When the Elite Theatre burned down in March of 1929, I suppose the folks involved thought they should return to the name “Empire” as a way of retaining some past history when a new theater was built.

The Empire building in the 1849 photo might have been the building that became the Empire Theatre. It was most likely a saloon or dance hall, and saloons and dance halls were sometimes converted into theaters during the gold rush period, as towns grew and became more prosperous and the miners and merchants began seeking more elaborate entertainment.

Thanks, Joe! That’s good information and I’ll check out that Google Book.

Mike, I probably should have been more clear. Yes, of course it’s a different building. I assumed from the photo that the Empire Theatre, in one form or another, had always been with the town.

Thanks to you both!

The last movie I saw at the Empire Theater was “Last Action Hero” starring Arnold Schwarzenegger back in 1993. I was 11 years old.

I saw that film too. Lots of fun. Must have been great on the big screen. Quite the satire on silly action pics.