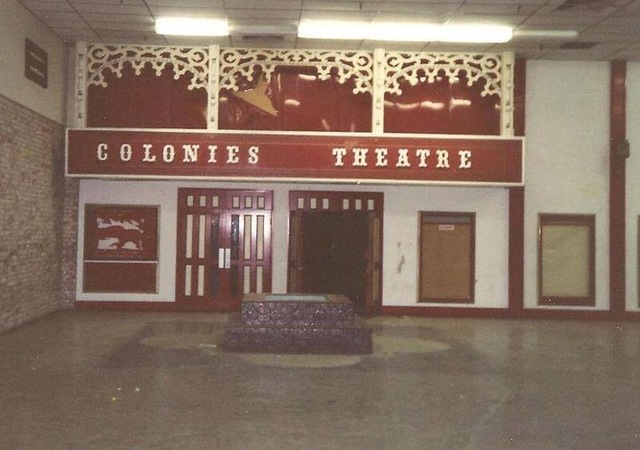 The Cinematex Colonies Theatre was opened on February 1, 1970 with Robert Preston in “The Music Man” and a vaudeville show. It was built and operated by San Antonio showman and media personality Tommy Reynolds. It was the last single screen theatre built in San Antonio. It was a beautiful theatre with 502 Griggs Pushback seats. It had a nice stage, and Mr. Reynolds put on some entertaining live stage shows in addition to movies.

The theatre didn’t catch on, and was kind of far out at the time and closed in 1972. Santikos Theatres reopened it on June 2, 1972, changed the name to the Colonies North Theatre, and had better success, although it never was as popular as it should have been. I was the assistant manager of the Cinematex throughout 1971. It was taken over by Movie One in 1977, but they closed it at the end of 1977.

Here is a May 1972 item from the San Antonio Express:

Santikos Theaters Inc. has acquired the former Cinematex Theater in Colonies North and will reopen it Thursday under the new name of Colonies North Theater. The new addition to the theater chain will show first-run and top-quality movies, said Ken Higgins, one of the executives of Santikos.

The theater will open with Walt Disney’s “Pinocchio” and “The Barefoot Executive.” Following that double bill the theater will show “Hans Christian Anderson” beginning June 16, followed by “The Garden of Fitzi Continis,” which won an Oscar this year for the best foreign film.

John Crawford, former assistant manager of Santikos' San Pedro Outdoor Theater, will be the manager of the new 500-seat theater. Other theaters in the Santikos chain are Century South, Olmes, and the San Pedro, Fredericksburg Road, Trail and Town-Twin outdoor theaters.

This opened as “Cinematex Colonies Theatre” on February 1st, 1970 with vaudeville and the movie, “The Music Man”. On June 2nd, 1972 it reopened by Santikos theatres as the Colonies North theatre with a Disney double bill. It was sold to Movie One in 1977, who closed it by the end of the year. Grand opening ads posted.