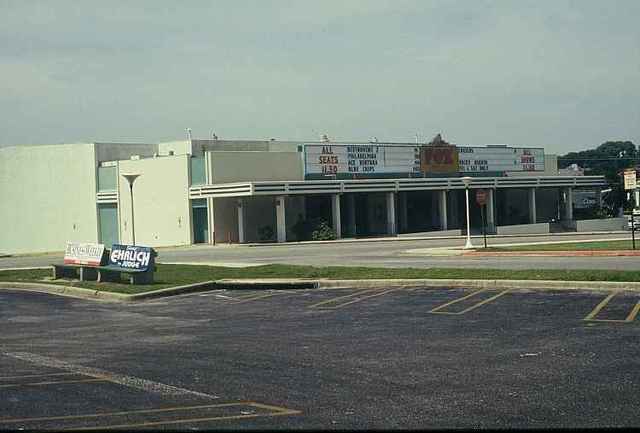 Located in the Central Park Shopping Center. This was a very nice theatre which was opened by National General Theatres on December 18, 1969 with Peter Ustinov in “Viva Max” on one screen. The second screen opened the following week. It was a true twin. Each auditorium held 750 people. It had huge curved screens and had gold traveller curtains. The seats were velour American Seating Stellers. Auditorium two was split on December 20, 1974. A fair job was done splitting the auditorium, but the elegance was lost. The new screens were very small.

Larry Benson, previously manager of the Fox Theater in Amarillo, now is managing National General Corporation’s new 1,500-seat Fox Twin Central Park Theaters in San Antonio. Benson, 28, started his theater career as a marquee and posterboy in Benson years ago while attending high school and worked his way up to doorman and then assistant manager.

He continued working for Fox theaters when he attended the University of Montana and upon graduation, was promoted from assistant manager of the Fox Theater in Missoula, Montana to manager of the Kiva Theater in Durango, Colo., in 1967. He held the Durango post until his transfer to Amarillo last year.

The January 13, 1975, issue of Boxoffice Magazine said that the former Fox Twin in San Antonio had reopened as a triplex on December 20, 1974. Actress Rhonda Fleming made a personal appearance at the opening. She had attended the opening of another Mann Theatre the previous day, at Lubbock.

Mann Theatres had plans to add three more screens to the Fox Central Park 3 at a future date, but it looks like they never got around to it.

A May 12, 1969, Boxoffice item about the groundbreaking for the Central Park Fox said that the twin was designed by the Los Angeles architectural firm of Pearson, Wuesthoff & Skinner. Johnson & Dempsey of San Antonio were the local associate architects.

The Fox Twin theatre was opened by National General Cinemas on December 18th, 1969 with “Viva Max”. the other cinema opened the next week. Grand opening ad posted.

I worked there for Larry Elmer as his Assistant Manager. It was 1971 and I was just out of college. When we had a blockbuster it was very busy. Cabaret played there exclusively in 1972.

6602 Blanco Road would be the proper address. It was on Rector and Blanco. Rector was absorbed into the big box center, once Central Park Mall was demolished.