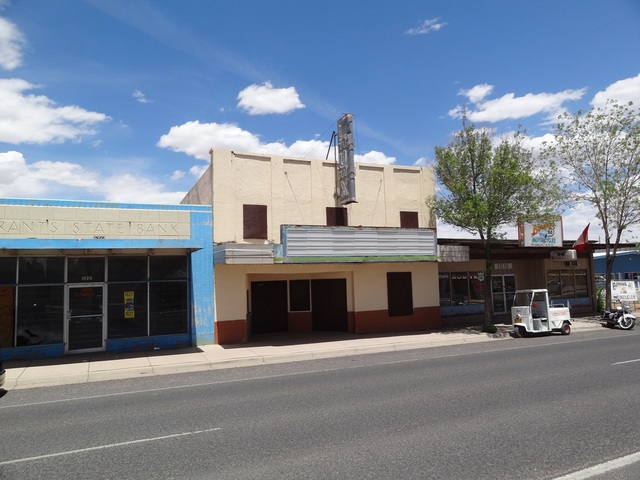 The Lux Theatre was opened in September 1937. In 1950 it was purased fro C.E. Means by J.C. West who proceeded to build the El Sol Theatre, which opened as West’s Theatre. The Lux Theatre was still open in February 1970 but was closed following a fire in the boiler house on February 16, 1970. It reopened and continued to operate until at least 1980.

I will be passing through Grants on my Route 66 trip starting this Saturday. I am bringing my camera.

That’s the place, allright. It didn’t take too long to get from one end of Grants to the other.

Here’s a 2006 view of the LUX: http://www.rushcreekgallery.com/lfop/index.html

Looks a lot better there than when I saw it a few years ago.

Another item in the same issue lists various pieces of equipment and furnishings installed at the Lux by the Denver branch of National Theatre Supply Company. Neither item indicates whether the Lux was new construction or a renovation of an older theater— perhaps the one that had closed in 1930.

An item in the October 11, 1947, issue of Boxoffice said that C.E. Means, owner of the Lux Theatre, was planning a new theater for Grants. To be designed by Albuquerque architect Gordon Ferguson, and to seat 500, the new house would be called the El Sol. I find no other mentions of this theater, and don’t know if it was actually built or not.

J.C. West, who would later build the West Theatre in Grants, bought the Lux from C.E. Means in 1950. He might have closed the Lux for a time in the 1960s, as the September 14, 1964, issue of Boxoffice mentions him as the operator of the West Theatre and the Sahara and Trails Drive-Ins in Grants, but makes no mention of the Lux. Then the January 30, 1967, issue of Boxoffice said that J.C. West had opened the Lux after an extensive remodeling. He intended to operate the house with an art film policy.

West was still operating the Lux as late as February, 1970, when the Boxoffice issue of the 16th said that the house had to be closed for one night due to a fire in a furnace blower. That’s the last mention of the Lux I’ve found in Boxoffice. J.C. West is mentioned once more, but only as the operator of the West Theatre, in 1972.

Mr. West bought the Lux and the construct of four walls that was to be the El Sol theater from a Mr. Means. When the second theater was complete it was named the West theater. The two drive-ins Mr. West built were the Trails and the Sahara. Prior to coming to Grants, Mr. West built a drive-in in Big Spring, TX circa 1948. The base of the screen tower was home to him and his family.

Multiple sources including former employees confirm that the Lux Theatre was open through 1980. “Up In Smoke”, “Good Guys Wear Black”, “Urban Cowboy” all played there.