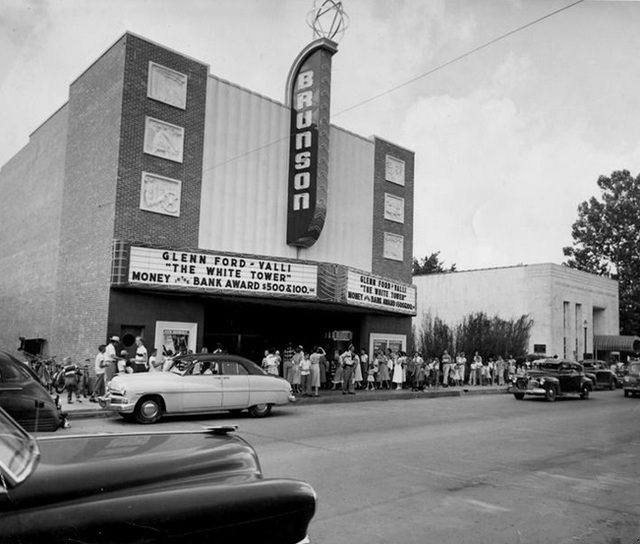 The Brunson Theater, which opened on August 23, 1949, is now a mere shell of a theater. The Art-Deco style designs remain on the exterior, but the interior has been completely gutted (roof, too!).

The city of Baytown purchased the theater in 1997 (foreclosure), and as almost a decade has passed, there is now talk (and potential funding) to adaptively reuse the structure as a performing arts venue.

Here is a photo:
http://tinyurl.com/2smny5

Locals reminisce about the theater:
http://tinyurl.com/2xrjan

The Brunson Theatre was designed by architect Leon C. Kyburz. There’s a photo of it on this page at the web site of the Greater Houston Preservation Alliance. They give the exact address of the Brunson as 315 W. Texas Avenue.

The same page has a photo of another Kyburz-designed theater in Baytown, called the Bay, built in 1942 at 3100 Market Street. It doesn’t have a Cinema Treasures listing yet.

OK, this web site has more pictures of both the Brunson and the Bay, but gives the address of the Brunson as 8200 S. Main Street. Somebody will have to check Google Maps to see which is correct (I can’t do it right now because Google Maps keeps crashing my browsers for some reason.)

Joe; Google Maps picture what looks like the rear of a theatre on W. Pearce Street when looking at the 315 W. Texas Avenue address. The 8200 S. Main Street is way off.

If you put in 310 W. Texas and then rotate the photo you will see the Brunson.

The actual address of the Brunson Theater is 311 W. Texas Ave.

quite a bit of details could be added here, which I will write up based on the original information printed in The Baytown Sun. The Brunson was built in 1949 at a reported cost of $100,000, the equivalent of $1.2 million today. It featured an 1185 seat sloped auditorium, and a 325-seat balcony with restrooms for both floors. The state-of-the-art pink plush Kroehler push-back seats ensured patron comfort and subtle downward cove lighting every four rows illuminated the carpeted aisles. Motiograph projectors and Mirrophonic sound was installed, as well as a 17x22 foot fire-resistant silver screen from the Williams Screen Company of Ohio. Hearing impaired patrons were delighted by hearing aids available on 18 of the seats. Even the sidewalk outside the theater was made of black iridescent concrete. Yes, even though this was his 8th theater, this was owner Howard E. Brunson’s jewel of the Gulf Coast. The first movie shown was Donald O’Connor’s musical comedy Yes Sir, That’s My Baby, and Miss Texas was on hand to cut the opening night ribbon, after which she appeared on stage accompanied by Al Sacker and his electric organ. A seven-page spread in The Baytown Sun elaborated the seemingly endless innovative features of the Brunson. “As modern as tomorrow!”