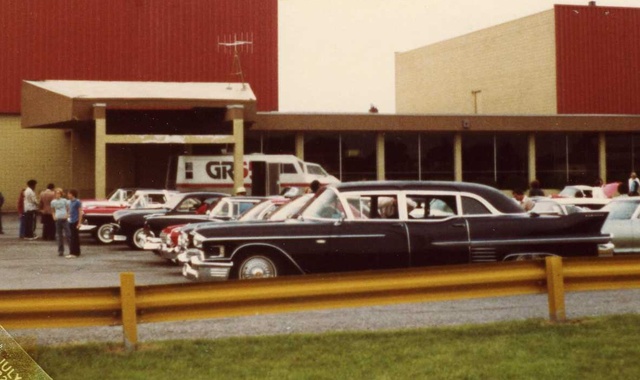 Built in 1964 on part of the site of the Aero Drive-In. A Cinerama twin, with a smaller outlying building containing four screens. The Holiday Six Theatres closed summer of 1995.

Yeah another theater I grew up with. Sooo many movies. I remember as a kid watching Poseidon Adventure here on a special midnight New Years Eve showing. Then there’s the Dino D remake of King Kong with folks sitting on the aisles. Same a couple years befoe with Towering inferno. Then the theaters in the back that I saw Smokey and the Bandit, Slapshot, Airport 77, Handle with Care etc. I remember the 4 back theaters had this cool vending machine that would sell little cheap mini-toys that I would beg my folks to buy me for 75 cents.

And I also noticed the glaring absence, as somebody has mentioned before, of the Plaza North on Niagara Falls Blvd and the Valu on Clinton. As good as this site is it isn’t exactly all inclusive.

The indoor theatre must had been opened in 1964. http://www.newyorkdriveins.com/westernnewyorkregion/aero/aero.php

This article from Boxoffice of August 30, 1971, tells of plans for Holiday Theatres 3-6, and features a drawing of the proposed house. It says that the four-screen expansion had been planned by Denver theater designer Mel C. Glatz.

The 1972 article that Tinseltoes linked to earlier has two photos of the quad as it had been completed. That article also says that the multiplex was to be expanded again, with the addition of four more screens, but as it is still listed here as the Holiday Six I guess that second expansion was never carried out.

I saw GHOSTBUSTERS at that very theater in 1984 – and my crush on Harold Ramis came to life right then and there! Such a magical afternoon!

What company ran this theater before AMC?

The description of this theater says it was a Cinerama twin, but the Holiday does not appear on Cinerama Theatres which lists only two Cinerama houses in Buffalo; the Teck Theatre (converted for Cinerama in 1955) and the United Artists Century Theatre, converted in 1967. An April 3, 1967, Boxoffice article about the conversion of the Century said that the opening of Grand Prix at the Century just before Easter would be the first Cinerama movie seen in Buffalo since How the West Was Won in the spring of 1963.

Holiday Theaters Inc., the original owners of this house, had owned the Aero Drive-In, on the site of which this theater was built. An article in the February 9, 1964, issue of the Buffalo Courier-Express said that Holiday Theaters had just broken ground on a restaurant on the site of the Aero Drive-In and planned to build a twin indoor theater on the site in the future. Holiday had just taken a lease on the Elmwood Theatre, which was their first indoor location. In addition to the Aero, the company operated the West Twin, East Twin, and Buffalo Drive-Ins in the Buffalo area, and the TePee Drive-In in Pickering, Ontario.

So, two paragraphs and one-hundred ninety-eight words later, I guess the answer to my question is: “Holiday Theatres Inc.” Thank you, Joe.

Oh, and I’m sorry if this comes off as snarky, but if some effort had been made to recognize my Remembering Cinerama series generously posted right here on Cinema Treasures instead of the all-too-common habit of referencing other, less reliable resources, you would’ve noted the Holiday had shown a Cinerama movie and that other Cinerama movies were shown in Buffalo in between How the West Was Won and Grand Prix.

There could have been another operator between Holiday and AMC, though. I haven’t been able to discover what became of Holiday Theatres Inc.

If there was another operator between Holiday and AMC, it would’ve been brief. Holiday, I believe, operated the theater through at least 1980, and AMC took over no later than 1984. If anyone has a more precise ownership timeline, please post.