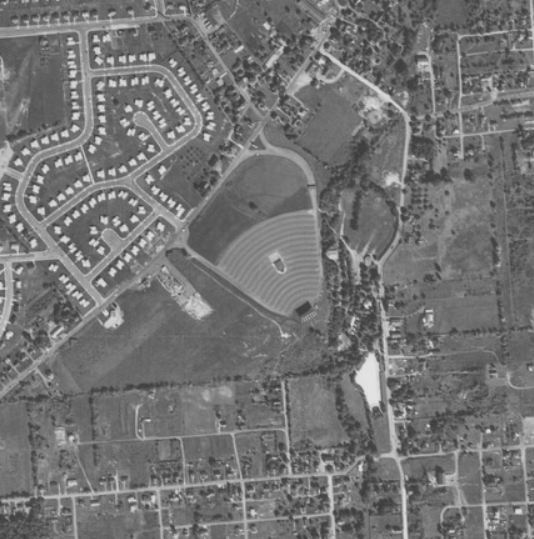 On Stefko Boulevard at Easton Avenue, next to the old Two Guys store just outside Bethlehem. The Bethlehem Drive-In was opened August 13, 1954 with Donald O'Connor in “Francis Joins the Wacs” & Forrest Tucker in “Flight Nurse”. It was operated by Harold Hershberg. Later taken over by the Boyd Theater Circuit, it was closed in 1995 and demolished in 1999.

It was operational until at least 1994, as I saw “The Lion King” there as a kid. Even then it was on it’s way out and probably closed not soon after.

Approx. address for this drive-in was 3050 Easton Avenue. From Google Maps, you can still make out the outline.

Uploaded Goggle Earth view…looks like that drive-in could be reopened.

the drive-in was open till 1995 and demolished in 1999 :( I have a photo of the old sign and it brings back memories… such a shame that an American icon like drive-ins are disappearing across the country and the switch to digital that is going on in the next year will send many more of the 368 drive-ins across the country to close up for good. Friends and I are trying to save the one in Lehighton so if anyone can help please help keep our cultural icon still alive… Drive-ins are such a different experience for the family than regular movie theatres.. We can remain in our own element, sit as we would like to and if we want to carry conversations in our vehicle or sitting outside it, it doesn’t bother anyone… please visit this youtube link and see how Honda is trying to help save drive-in theatres… tell me this video doesn’t warm your heart… http://www.youtube.com/watch?v=zh2ULhXtqYU&feature=share

according to driveins.com the address was 3170 easton avenue, Bethlehem, Pa 18017… siiiiigh i miss the drive-in and technology is quickly becoming our greatest gift and our worst enemy all in one..

I grew up in one of the houses pictured in the aerial photo. Hampshire Road is the street directly across Easton Avenue from the left entrance/exit, and Butztown Road is the street closest to the right one. The drive-in was a mile east of the intersection of Stefko Blvd/Easton Ave.

Launched for Harold Hirshberg on good luck Friday, August 13, 1954. Would become part of the Boyd Theatre Circuit out of Philadelphia.

Billboard, March 20, 1954: “First drive-in for Bethlehem, Pa., has a May opening planned. It will be located near the Butztown city line. Harold Hirshberg, who operates the Palace Theater, Bethlehem, said the operation sponsored by a group of his associates will be built at a cost of $175,000 and will accommodate 900 cars. The drive-in will be erected on a 20-acre site purchased by the newly formed company, Bethlehem Amusement Corporation, of which Hirshberg is secretary. He said the local project will be the first outdoor theater in the country built exclusively for CinemaScope. Acreage will permit construction of long driveways, all modern equipment, a playground for children and a nursery.”