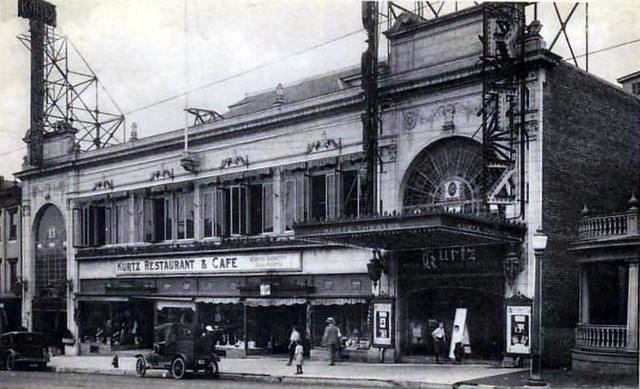 Originally opened in 1921 as the 1,500-seat Kurtz Theatre, the theatre featured vaudeville opening acts prior to film screenings. The gala opening featured a seven piece orchestra (under the direction of John Hepple Sheppard) and a massive Estey pipe organ. Opening attractions at the theatre included Shubert Advanced Vaudeville Acts of ‘The Ziegler Sisters’, ‘Jolly Johnny Jones Company’, a minstral show with ‘Harper and Blank’, and female impersonator ‘Francis Renault’. The silent film “The Great Moment” starring Gloria Swanson followed the vaudeville opening acts. The Kurtz Theatre was closed in July 1924.

In 1924, the theatre was purchased by the Wilmer & Vincent circuit and renamed Colonial Theatre, as they were also the owners of the Colonial Theatre, Allentown, PA. In 1925 it was remodeled to the plans of architect William Harold Lee.

A.R. Boyd Enterprises of Philadelphia purchased the theatre in 1934, and it was renamed Boyd Theatre. The new owners had several other theatres including the Boyd (Allentown), Boyd (Easton), Boyd (Philadelphia) and Globe (Bethlehem).

In 1970 a local family purchased the Boyd Theatre. They continued to operate the Boyd Theatre as a single screen first run theatre. In 1999, a brand new state-of-the-art Dolby Digital Surround EX sound system was installed to accommodate the showing of “Star Wars: Episode I - The Phantom Menace”. It remained one of the best surround sound systems in the area.

The Boyd Theatre was closed in Spring 2011 due to damage from rainstorms. The owners asserted it would reopen. In February 2019 plans were announced to convert the building into apartments.

Sale cancelled, so there is hope for the Boyd.

If Moravian bought it, that would be the best outcome, IMO. It would be great to see this fine old theater restored for stage productions.

Yesterday’s Morning Call (12/13/14—ha!) reported sale of the Boyd to Moravian College, which plans to restore the Boyd for its theater program. This is good news! As a former production house, the Boyd has an ample stage house, dressing rooms, orchestra pit (to be uncovered?), etc. One drawback is the tiny lobby, which is scarcely a lobby at all, but rather an extension of the entrance foyer (corridor). We’ll see how extensively they plan to restore the interior features, which have been covered by curtains for years, probably due to deterioration from leakage. I think that there are box seats behind the curtains. Also, at present the AC machinery occupies a substantial area on stage! This will have to be moved, of course. Let’s hope that the College does it right and returns this venerable old treasure to its former state of restrained dignity (it’s not an elaborately fancy “movie palace” by any means).

Today’s Express-Times says that Moravian has backed away from the sale. Bethlehem hopes that it will proceed with the other investor, but he says he is only interested if Moravian is in the deal.

WOW! The morning papers are reporting Joyce Hecht has sold the Boyd (with 4 stores, office space and a basement used as a club) to an undisclosed limited partnership for $1.35 million. Heydt is said to be “thrilled” with the new developer. The realtor that handled the deal says showing movies has not been ruled out but described plans for an “arts center.” Moravian College, which made an attempt to purchase the property earlier, has already said they look forward to talking with the new owners. WOW! The realtor says the new owner “has the funds to do everything he needs to do.” and “I think it’s going to be pretty spectacular.” WOW! I’m keeping my fingers crossed, but WOW!

Very big news indeed! This is the only movie theater remaining in downtown Bethlehem. Allentown lost its last one when the Colonial was demolished (still has Symphony Hall a/k/a Lyric of old), and Easton has the State. Under all the later trappings in the Boyd there is a real vintage house that will be a treasure again if the restoration is properly handled. Let’s hope so!

sold to developer Charles C Johnson, no promise it will be a theater again-

It’s Charles Jefferson, not Johnson. Sounds like a guy who gets things done; let’s hope his “thing” is preservation/restoration! Great if movies return, but the important thing is keeping it as a theater!

I would be nice to see classic movies there during the holidays and also have appearances by up coming celebrities. Hate to see this building go to waste.