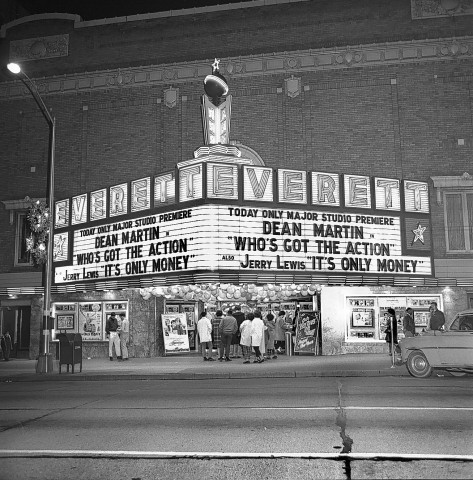 The Everett Theater, the largest of all of Everett, Washington’s former eight theaters, opened its doors for the first time in 1901, as the Everett Opera House.

In addition to opera, featured legitimate theater and vaudeville shows (as well as motion pictures by the teens) were the programming of the day. Among those to grace its stage in those early years were some of the biggest names in early 20th century entertainment such as Lillian Russell, Al Jolson, Eddie Foy and the Seven Little Foys, and George M. Cohan.

In 1923, a disastrous fire swept through the Everett Opera House, entirely destroying the interior and causing the front wall to partially collapse. The theater was rebuilt almost entirely, and reopened as the 1,200 seat New Everett Theater in 1924. It featured both film and live stage shows in its first couple decades of operation.

In 1952, the theater received a major remodeling which removed much of the orignal 1920’s interior decor, and a Space-Age style marquee was added to the pink-marble facade. The original foyers and lobby spaces were totally gutted and rebuilt at the time, adding concession stands and a new ticket window.

In 1979, the declining theater prompted the Everett’s owners to chop the balcony into two small auditoriums, triplexing the theater, in the hopes it would attract more theater-goers. The new three-screen Everett proved unpopular and within a decade, the theater had closed.

Sitting vacant for several years, a concerned group of citizens rallied to the decaying theater’s aide, and formed the Everett Theater Society, to save and restore the Everett to its 1924 appearance.

Restoration took place between 2000 and 2004 and the theater now screens classic movies and present concerts and stage productions as well.

During the restoration the original ceiling dome was rediscovered. This dome creates incredible acoustics and an unmagnified voice on stage can be heard at the back of the balcony. Unfortunately this rare feature is seldom, if ever, used.

The Everett Theater Society acquired a thee-manual, 14 rank, Kimball theater organ in September 1997. Following installation, an inaugural concert was held on October 2, 1999. The Everett cancelled its Silent Film series after the Tuesday, May 9, 2006 screening of The Phantom of the Opera (1925). At this point, there have been no announced plans to resume the series. The current schedule includes the 10th annual â€˜Everett Womanâ€™s Film Seriesâ€™, a two day event consisting of new feature and documentary films.

Here is a peek at The Everettâ€™s two beautiful, vintage carbon-arc projectors, housed in their main floor booth.
View link

I am just exporing this wonderful site, learning a lot…

I am a veteran of almost forty years in motion picture exhibition and would be happy to answer this lady’s wuestions (and any similar ones). Please contact me at Thanks and have a fantastic 2009.
Don Shafer

Here is a view of the concession stand in 1960:
http://tinyurl.com/cctqm8

Here is an excellent history of the theater, excerpted from the book “Mill Town Footlights” by David Dilgard:

The opening of the Everett Theatre was noted in this item from the September 20, 1924, issue of The Moving Picture World:

“The magnificent new Everett, costing over $250,000, opened on August 29 to capacity audiences. The house is the last word in modern theatre construction, and is not equaled anywhere on the Pacific Northwest for beauty and comfort. Pilz & Swanson are owners. D. G. Inverarity, well known theatrical manager and showman, is house manager. Of particular interest was the fact that the opening shows were accomplished absolutely without a hitch of any kind, as though the house had been running for weeks.”