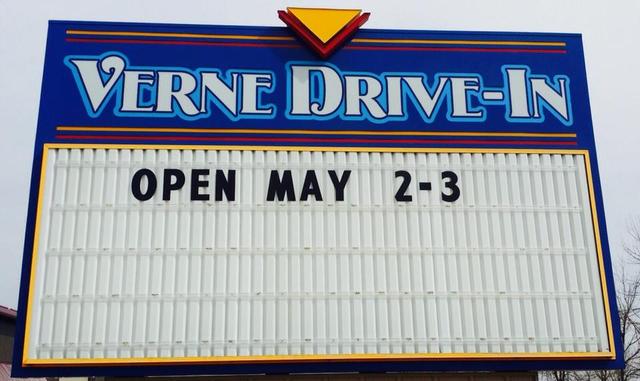 A drive-in theater that’s fun for families with small children. The Verne Drive-In was opened in 1954.

It was owned by J.M. Rohr in 1956. He had Drive-ins in Cross Lakes and Hackensack Minnesota.

The Verne Drive-In initially opened in 1954. Car Capacity is 265 Cars. Was closed for a while and reopened in 2000. It is owned by Mr. G. Burmeister. the drive-in has made the conversion to digital projection.

1963 IMPA showed “Owner or Booker” as K. C. Sargent, who wasn’t listed anywhere else in MN.

The 1988 IMPA, the last with a drive-in list, still included the Verne.

A great 2014 Pioneer Public Broadcasting video fills in a few more gaps. (And has some lovely old photos, you should go watch it.)

Ken Sargent built the Verne. Walter Deutsch bought the place in 1966 and built a house next to the ticket booth. Deutsch sold the Verne in 1983, but he still sells tickets on movie nights “when they need help” since he lives next door.

(Maybe I didn’t hear that sale date right, since the City of Luverne site claims Deutsch operated the Verne until 1988.)

Glenn Burmeister bought the Verne in 2000. (Luverne said the drive-in “reopened” that date.) He built new ticket and concession buildings and probably was the one to remove the old speaker poles.