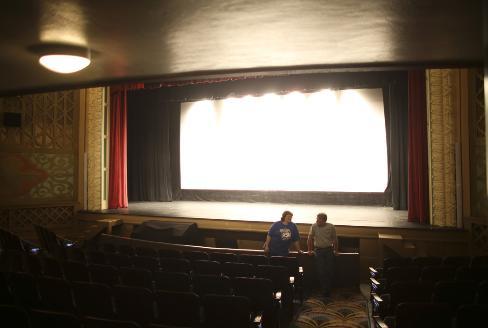 Originally named the New Opera House, it opened in September in 1915 and was designed by architect W.E.E. Greene. It was opened by Herman Jochims. It was soon renamed the New Palace Theatre and used for both vaudeville, concerts, and motion pictures.

Built in the Beaux-Arts style popular around the early years of the 20th Century, a tall vertical marquee spelling out the theatres' name was added a couple decades later.

In the theatres' first few years, Herman Jochims wife Maude would accompany the silent films on a piano, and, after a pipe organ was installed in 1926, Mrs. Jochims would do the same on the organ.

In 1945 the interior was completely re-designed in an Art Deco style. The Palace Theatre has been heavily restored recent years to return the theatre to this Art Deco appearance, and today not only still features movies, but live entertainment on its stage.

It would seem that the Jochims loved their theatre so much, they decided to stay around there long after they passed away, according to both staff and patrons at the Palace Theatre. For many years now, the spirits of both Herman and Maude have been seen around the theatre.

Herman, it’s said, likes to stand in the balcony and observe performances now and then, and Maude still enjoys playing the theatre’s organ, even during the time it was inoperable, before a restoration returned it to working condition.

The Palace Theatre was added several years ago to the National Register of Historic Places.

This theatre has been pictured many times during the Ken Burns film “The War” which is currently being aired on PBS.

I was wondering if there was a listing and here it is! Have been watching the series……..

I am looking for information on the architect W.E.E. Greene. They designed my house in 1897, the J.W. Gerber House, in Luverne, MN. If you have any information on this architect, please let me know. I am hoping to find someone who might have a set of building plans for preservation purposes. Please send any correspondence to:

I was in Luverne back in 1987 or 1988 and the theatre portion was closed off and the lobby acted as a video store. I must say though that I can’t remember if it was indeed this theatre but I do know it was in Luverne, Minnesota.

From the 1920s a postcard view of the New Luverne Theatre in Luverne.