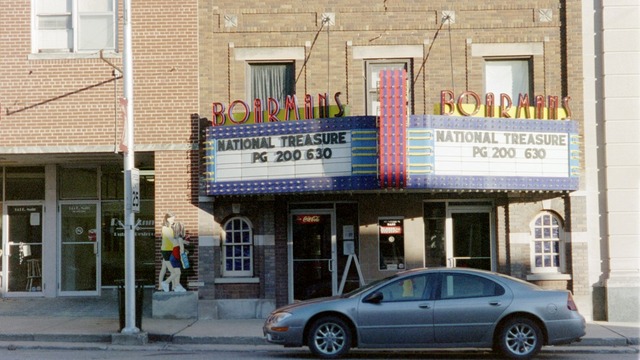 Boarman’s Roxy Theatre was reopened in downtown Shelbyville on November 5, 2003. Barely ready for its grand re-opening, after a team of volunteers made a bet the theater would open on the date of its closing 37 years prior, the Roxy premiered with a free screening of “Mary Poppins” to a standing room only crowd. A row of the late Bob Boarman’s pink and mint green classic cars parked outside the premiere as the brand new marquee lit up the streets.

Having gone decades without a movie theater in a twenty mile radius, Shelbyville decided to re-open its defunct theater in the dying downtown.

Originally called the Playhouse, in a block of 1880’s brick buildings which was leased in November 1936 to the Frisina Amusement Company. In August 1939, the theater was remodeled with air conditioning and other modern conveniences and renamed the New Roxy with 424 seats. The Roxy ran movies until November 6, 1966, when its final curtain fell on “Mary Poppins”. The theater was stripped of its marquee soon after and hosted a myriad of specialty stores until the movie house became unrecognizable in its history of many faces.

The Film Daily Yearbook;1950 edition gives a seating capacity of 496 for the Roxy Theatre.

When the theater was restored, brand-new seats were added to the small theater and the rows were spaced apart a little wider to give patrons more leg room. My cousin was a volunteer who screwed in the seats.

The price has gone up to $4.00 but it is still well worth it. You can’t beat the concession prices! It’s fun to go to a theater that my Mom and Dad went to when they were kids.