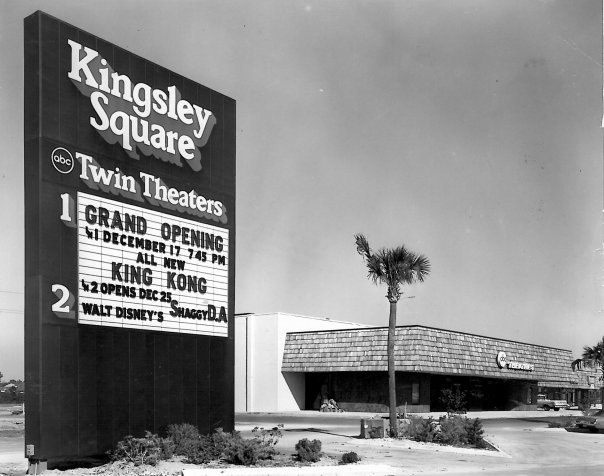 Orange Park twin theatre located in shopping plaza at Kingsley Avenue and Blanding Boulevard. Screen 1 opened on December 17, 1976 with Jeff Bridges in “King Kong” and Screen 2 opened on December 25, 1916 with Dean Jones in “The Shaggy D.A.”.

OP5 Original (great name by the way): Where exactly was the Village located. Somebody once told me it was across from the library on Plainfield.

The Village Cinema was located in a little shopping center on Kingsley Avenue in uptown Orange Park. The last time I was in the area, If the shopping center is still there, a store called “Pinch-A-Penny” was located in the front and I believe there was a Dairy Queen in the right front of the shopping center parking lot near the road or just to the right of the shopping center near the road. I think the “Pinch-A-Penny” store was once a “Winn-Dixie” before it moved to the shopping strip that faces Highway 17 near Kingsley Avenue. The theater was inside, near the rear. The floors were flat (level) with no incline. I saw “One Flew Over the Cuckoos Nest” and “The Song Remains The Same” at that theater. It wasn’t part of any theater chain and actually pulled a little muscle in the early days of the Orange Park 5. OP5 lost “Smokey and the Bandit” to them. OP5 ran the trailers and even had the “Coming Soon” poster up for “Bandit”, but was denied when it released.

That’s exactly the spot I was thinking of, which is across from the library. Thanks for clarifying that for me!

It concentrates on Miami and Jacksonville theatres and has a lot of old newspaper ads from the Florida Times Union in the Serious Jacksonville Exploitation.

And thanks again for the info. Everybody I asked could never seem to remember where the Village was.

I was an Usher and then soon promoted to projectionist at this theater from 1979 – 81 , then again 83-84. In fact I actually bought the very first ticket sold there in 1976 when “King Kong” opened. It was a great theater and had a good sound system. since I closed up the place most nights , I would sometimes bring my synthesizer and drum machine and hook it up to the sound system and just blast it. Oh man that was great! My proudest achievement while working there was to convince the owners to run 2001: A Space odyssey two weeks before the Empire Strikes back opened up. It looked great having 2001 advertised on the Monolith like Marquee! Good memories!

Oh and I also remember the Village Cinema very well as i was pretty good friends with the owner, a pretty young guy as I recall but was very cool.He was always happy to talk about movies with me a snot nosed 12 yr old at the time who love monsters and science fiction. He even took my suggestions for the Saturday kiddie matinees and got hold of some real gems for me!

The Kingsley Twin was opened by ABC-Florida State Theatres in December, 1976. It was designed by the Columbus, Georgia architectural firm Brookbank, Murphy & Shields.