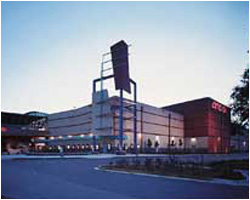 One year after the Orange Park Mall opened, the Orange Park Five Theaters opened in the summer of 1976 with "The Omen", "Logan’s Run", “Food of the Gods” and Walt Disney’s "Peter Pan" in two theaters. "The Outlaw Josey Wales" replaced Peter Pan in one of the theaters the second week the theater was open.

This was the first theater in the Jacksonville, Florida area with more than two screens. It also presented the smallest theater auditoriums that had ever been encountered by movie patrons in this area. Auditorium 5 had only about eighty-five seats! The screen was about the size of some you see in church and school auditoriums today. A huge mural of Marilyn Monroe caught your eye as you entered the lobby. The concession was set up to serve movie goers, as well as mall patrons who wanted a treat, but not a movie.

The theater was located at the mall entrance near the Morrison’s and Orphan Annie’s Restaurants. Due to the fact that the mall placed size limits on signs, you had to look hard to find the theater from the outside. Small black letters spelled out "Orange Park Five Theaters". No movie posters were allowed on the outside of the building. In 1977, "Star Wars" played there for 32 weeks after playing for 27 weeks at the Kingsley Twin down the road!

In the late 1990’s, the theatre expanded to the outside of the mall with a Twenty-Four Screen Mega Theater. Having seen a number of theaters (Village Cinema, Kingsley Twin, UA Movies of Orange Park, General Cinema Four) come and go from the small town of Orange Park, this AMC Theater has been the reining champ for over thirty years now!

A very nice write-up. However, if I go to see a movie here, I have to go during the week and a late showing just to avoid the idiots who talk on their cell phone, check their cell phone and just talk to each other in general.

A few weeks ago, I went on a Wednesday Night at around 10pm to see THE STRANGERS. What I didn’t know is that that was the week local schools let out. Tons of high school kids just rappin' their gums. I got a re-admit pass but the manager on duty didn’t even bother to say sorry or anything. He just walked into the office and brought me a pass and walked off. Multiplexes are horrible. If you’re in Jacksonville, check out the San Marco theater for a fun movie going experience.

I remember the San Marco. I must have seen “The Rocky Horror Picture Show” there twenty times in the 1970’s. I don’t get to Florida much these days. Would like to see the San Marco Theatre, as well as what they’ve done with The Florida Theater downtown. The Commodore Theater in downtown Portsmouth, Virginia is a wonderful theater experience if you are ever in that area. I am in agreement about the mega-cinemas. Unfortunately, I think they keep the movie going experience alive.

Actually , I was there the opening Day which was the first Friday of July ‘76 and you made a slight mistake it was Bert I. Gordon’s “Food of the Gods” not “At the Earth’s Core”.ATEC didn’t play till the fall. You are correct about “Outlaw Josey Wales”,“The Omen”, “Logan’s Run” and perhaps “Peter Pan” Though I don’t remember that playing. I remember they had crazy mirror setup so that the projection booths could be on the ground floor. This theater was vastly inferior to the Kingsley which opened 6 months later. I remember walking in a thinking this was only slightly better that the Village Cinema.

From the intro attributed to Charles Hankinson: “In 1977, ‘Star Wars’ played [at Orange Park 5] for 32 weeks after playing for 27 weeks at the Kingsley Twin down the road!”

This article references the original Jacksonville “Star Wars” engagements but cites different duration figures than what was given in the theater intro above. The linked-to article cites only 13 weeks for the Orange Park moveover run and only 21 weeks for the Kingsley Twin run, plus the article cites other JAX runs at Plaza Twin and Northside Twin.

On a separate matter, I wonder if the Orange Park 5 and Orange Park 24 deserve separate pages here in the Cinema Treasures database? Was the 24 an expansion of the 5-plex, or was it an all-new build in a separate location?